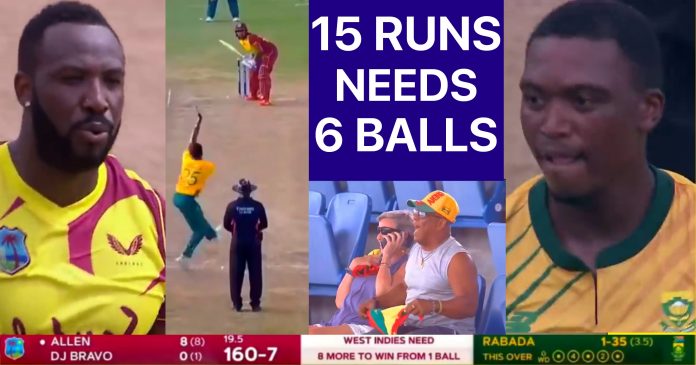 West Indies and South Africa are facing each other in a T20 series of 5 matches. This series is turning out to be quite enthralling as both teams are fighting tooth and nail against each other. Consequently yesterday’s match turned out to be nerve wracking as South Africa won the match by just 1 run.

The game was hosted by St George’s as West Indies won the toss and elected to field first. For South Africa, Quinton De Kock batted with grace and made 71 runs in 51 balls. Moreover, he was the highest scorer for his team. Additionally at 147-3 in 17 overs, South Africa looked to go into the fifth gear and take the score above 180. However, this never happened as the Proteas suffered a collapse.

Just 20 runs came in next 3 overs and the tourists lost 5 wickets. Hence, South Africa could finish at just 167-8 in their allotted 20 overs.

Chasing a target of 168, West Indies had a good start to their innings. The openers Simmons and Lewis added 55 for the first wicket in 6.5 overs. Post that, the hosts lost wickets at regular intervals. None of the batsman could stay at the wicket. Consequently after 19 overs, West Indies were staring down the barrel at 153-7.

In the last over, the home team required 15 runs to win with the experienced Dwayne Bravo and Fabian Allen at crease. Furthermore Kagiso Rabada was given the task to defend the runs for his team.

The first ball Rabada bowled was a leg side wide with Allen on strike. Next delivery was a superb Yorker as the ball went between the legs of the batsman for a dot.

On the second ball of the over, Rabada again tried to deliver a Yorker. However, he missed his mark and bowled a full toss which was dispatched for a four. The third delivery of the over was an action replay of the first as a terrific Yorker went between the legs of Fabian Allen.

Fourth ball was a very full delivery as the batsman flicked it to square leg for a brace. Now 8 runs were required on 2 balls as Rabada ran in to bowl again.

Yet again, Rabada delivered a sensational Yorker and again, the ball went between Allen’s legs. It was a display of brilliant death bowling by Rabada.

With 8 to win on the final ball, the game was as good as sealed. A full toss by the bowler was bashed into leg side but that didn’t matter. West Indies could only make 166-7 in 20 overs as they fell short by 1 run.

Watch : Foreign players praise and wish Dhoni on his birthday