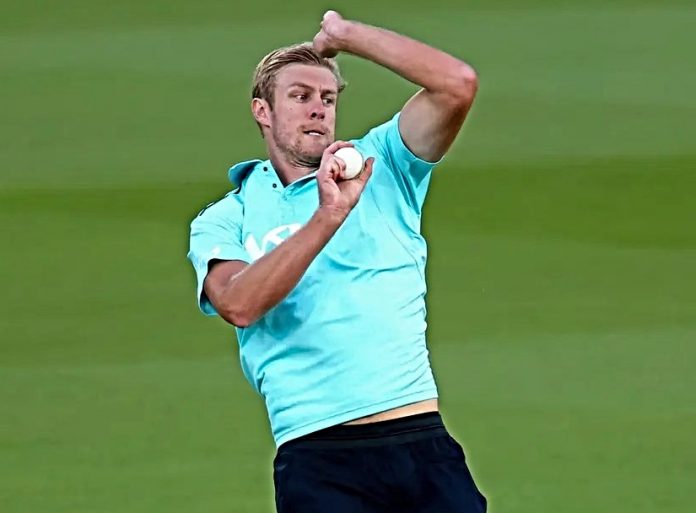 The newest entry in list of exciting fast bowlers in international cricket is Kyle Jamieson. A 6’8 inch beast from New Zealand, he can swing the ball at high pace. Moreover the bounce which he generates makes life uncomfortable for the batsmen. This was evident in the World Test Championship against India. The lanky pacer took 7 wickets in the match and dismissed Indian captain Virat Kohli in both the innings. Hence, he was considered the man of the match in the Finals.

Now, Jamieson is carrying his red hot form for the English local T20 tournament. Called as Vitality Blast, a total of 18 teams participate in this divided in two groups of 9 teams each. Jamieson plays for the county team called Surrey. In a match of Glamorgan vs Surrey, the tall pacer from New Zealand starred with both bat and ball. However he could not take his team to victory. In a nerve wracking match, Surrey lost the match by 1 run.

Batting first, Glamorgan made 153-6 in 20 overs. David Lloyd and Billy Root made 41 runs each and were the top scorers for their team. Jamieson took 1 wicket in 3 overs and gave away 27 runs.

In reply, Surrey could only manage 152 runs for the loss of 9 wickets in 20 overs. Ollie Pope was the highest run scorer for Surrey as he made 60 runs in just 45 balls. However, none of the other batsmen could score freely as Surrey was reduced to 127-8 in 18.1 overs. With 26 runs required in 11 balls, Jamieson took the task of reaching the target in his own hands.

He smashed 14 runs in next 5 balls to bring the required equation to 13 runs from 6 balls. On the second ball of the over, Jamieson pummeled a six. A single followed on the next ball. On the fifth delivery, his partner took a single to bring him on strike. Now just 2 runs were remaining on last ball.

However, the batsman Jamieson was run out while going for the single run which would have tied the match. He made 31 runs in 15 balls and hit 3 fours and 2 sixes. Hence, Surrey lost the match by 1 run.

Watch MS Dhoni giving tips to Jadhav, Rashid and Khaleel after the match.