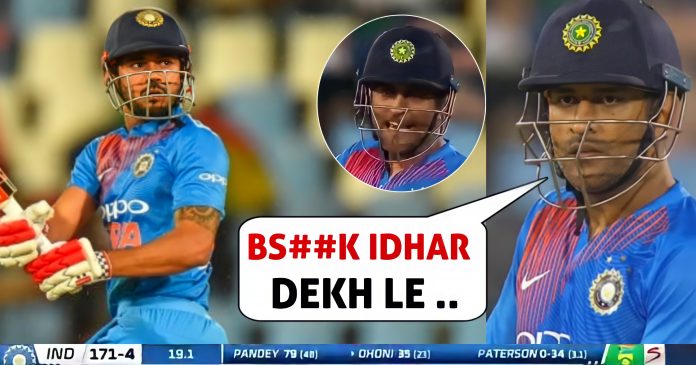 Former Indian wicket keeper and captain MS Dhoni was known to be amongst the coolest cricketers of India. Called as captain cool, Dhoni used to maintain a calm demeanor while playing a match. No matter how tense the situation was, the Indian skipper would never flinch or shout at his team mates.

However exceptions are always there. In a career that spanned close to 15 years, Dhoni did end up losing his cool sometimes. Hence contrary to his normal behavior, he would become angry at few moments and the players would bear his wrath.

This post is about one similar incident when Dhoni made no secret of his displeasure at a particular moment. The player who faced his ire was Manish Pandey. It was a T20 match between India and South Africa in Centurion. India had won the first match and were leading 1-0 going in the second match.

Batting first, The Indian team made 188-4 in 20 overs. Manish Pandey top scored with 79 in 49 balls and Dhoni applied the finishing touches with a blistering innings of 52* in 28 balls. It included 4 fours and 3 sixes.

Chasing 189 runs, JP Duminy and Heinrich Klassen played brilliant innings of 64* and 69 runs each. The duo added 93 runs in just 45 balls as South Africa chased down the target in just 18.4 overs for the loss of 4 wickets. Consequently the series was levelled at 1-1. For India Yuzvendra Chahal returned with sorry figures of 4-0-64-0. This is still the most expensive figures for any Indian bowler in T20 cricket.

However the ‘Dhoni’ moment happened earlier when Indian team were batting. It was the last over of the Indian innings and Dhoni was on strike. Suddenly he looked at the non strikers end where Manish Pandey was standing and screamed angrily – “Oye B****** ke, Idhar dekh le. Udhar kya dekh raha hai”. ( You Moron, watch here. Why are you looking there ? ).

It appeared that Dhoni said those stern words because he wanted Pandey to concentrate on the strikers end. However Manish Pandey was looking elsewhere which made Dhoni go berserk on him.

The video of the incident quickly became viral on social media as fans watched Dhoni shedding the responsibility of maintaining calmness.

Watch the video of the incident here :

Watch : Virat Kohli gets shocked after getting out only on 44 Runs.