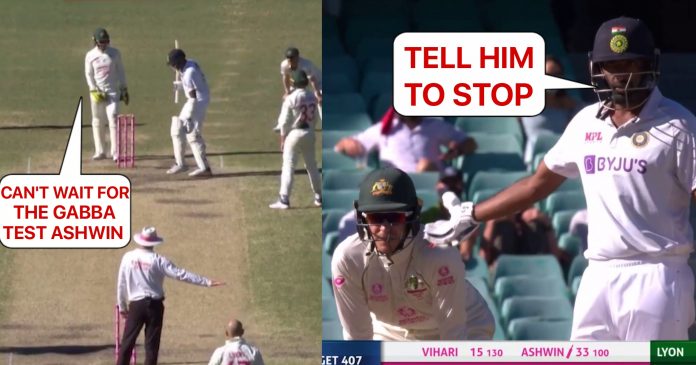 Australian captain Tim Paine has went one step ahead and sledged Ravichandran Ashwin on the final day of Sydney Test. India and Australia played very hard in the third test but some resilient batting from India helped the team clinch a memorable draw.

Despite losing captain Ajinkya Rahane very early on the day. The remaining players were brilliant with the bat which caused lot of frustration to Australian players. They were unable to get the wickets.

So as a last stop, Paine went onto upset Ashwin who was batting brilliantly. The Australian skipper has become more vocal as India took Australia away from the win. The hosts were confident to win the test match on the final day.

“Can’t wait to get you to the Gabba, Ash,” Paine said to Ashwin while facing Lyon in the 122th over of the innings. However, Ashwin did not stay silent but gave it back to Paine immediately.

“Just like we wanna get you to India, may be your last series,” was the reply from Ashwin.

Ashwin batted brilliantly with Hanuma Vihari to coast India to a draw. The duo played out 43 overs of the final day and looked very comfortable despite Australia trying everything they had against the pair.

The veteran spinner made an unbeaten 39 but could have easily scored a half century on any other day. He did not take singles or any runs due to the hamstring injury to Vihari. The draw is going to give lot of confidence to India going into the final test.

However, the team needs to quickly find the ideal XI as injuries continue to be a problem for visitors. Jadeja might miss out on the final test while Rishabh Pant looks fine after suffering an elbow injury.

The juggling of squad could see India adding another batsman rather than a bowler to the Brisbane test. No matter the result in the final test, India did exceptionally well playing against strong Australian team after losing half of their final XI due to injuries over the course of the series.

The fourth and final test will be played at Brisbane from Friday, January 15th. The teams have agreed to play the match and only 50% crowd will be allowed due to new covid strain.

Watch: Full video of Shakib breaking the stumps and fighting with Umpire.

Watch : Shikhar Dhawan gets emotonal during toss in 1st ODI vs SRi ...