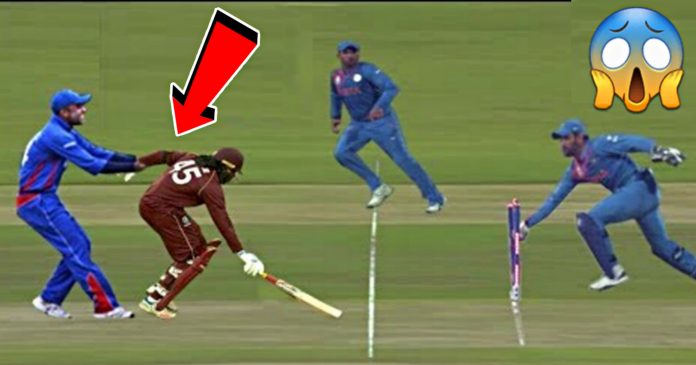 This was an ODI match played between Australia and England.It was being played, in the Australian summer of 2010, after Australia had lost The Ashes for the first time, in 24 years at their homeground.

As the ODI was going on, at a critical stage of the match Michael Yardy, the left arm spinner, of England was bowling to number 8 Australian batsman Mitchell Johnson.

The batsman tried to slog sweep Michael Yardy ,but, missed the line of the bowl as the ball went, under his attempted slog sweep and went, to the wicketkeeper Matt Prior.

He collected the ball and asked, for an appeal, as one of the ball was disturbed and fell. What Prior wanted, was an appeal for bowled and asked the umpire, to have a look at the stumps, so that they can give the decision of dismissing Johnson.

But when the third umpire was called to look, it was found that not the ball, but it was Matt Prior standing, behind the stumps who had, intentionally disturbed the bail so that it may fall, and he can show it as a genuine dismissal, but eventually, his cheating was found out.

This test match was being played in Australia. The Australian team was batting at 232 for the loss of 4 wickets, when something bizzarre happened.

One South African player was, caught in the camera, trying to wipe the sweat of his both underarms by the ball!!!

It was a very poor attempt, at trying to get the shine on the ball and make it do something for the Proteas bowlers. Thankfully, the Umpire got hold, of the situation and asked the player to, not repeat that mistake again!

This particular test match was being played in the year 2008 between India and Australia. India was batting with Sachin Tendulkar, on the crease and was facing the bowling of Shane Watson, the Australian fast bowling all rounder.

Watson bowled a length delivery, on the pads of Tendulkar as batsman played a flick off his legs. The ball dribbled along the fine leg and was, about to pass the wicket keeper Brad Haddin, when he did something out of the laws of cricket.

The keeper when saw, that his dive won’t be enough to stop the ball, threw his gloves on to the ball, to reduce the speed of the ball, as it stopped the next moment.

The umpire Billy Bowden however, saw the action and quickly told Ricky Ponting who was the Australian captain. It was against the laws of cricket and can’t be done in right mind.

Despite the arguments of captain Ponting, the Umpire Billy Bowden went ahead and rewarded, five runs to India as per the law of the game.

This was a world cup match going on between Sri Lanka and Austalia.

The Australian bowler Steve Waugh was, bowling to Sri Lankan batsman Sanath Jayasuriya. He delivered a well disguised slower ball to Jayasuriya. He totally failed to read, the pace of the ball and went ahead with his shot.

However as he was, beaten by the pace of the ball, he chipped it straight to short mid wicket, who took an easy catch. However Jayasuriya stood his ground and acted, that the ball had bounced before the fielder had caught the ball! Watch it for yourself to believe this.

This game was played in the summer of 2009, as Australia and Pakistan were locking horns in the ODI series. In a tense situation of the match, when Australia required 35 to win of 30 balls, something strange was seen on the ground.

The bowler Rana Naved threw the ball to his captain Shahid Afridi, in order to wipe the ball but what Afridi did was an absurd thing.

He started biting the ball like it was an apple and did it twice, within a span of 10 seconds. Everyone including the bowler and umpires, were surprised at this act by Afridi.

Need less to say the umpires talked, with Afridi over this matter and warned him. Post match, Afridi was fined for this gross misconduct!

Here is the video of all 7 incidents

Watch Hardik Pandya Hits Bullet Throw vs SRH Then See What he said after...

Watch Five most expensive captains in IPL and their shocking salary.