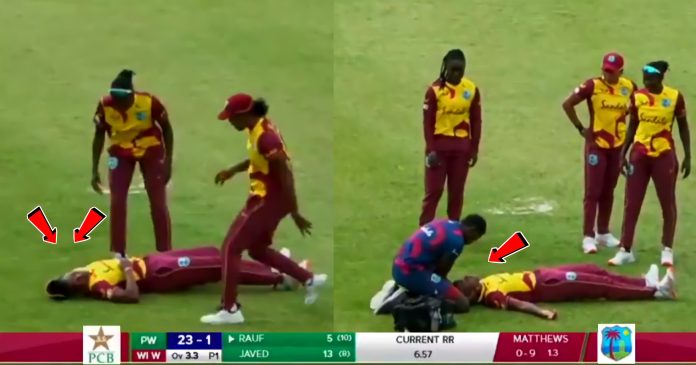 In an unfortunate incident two West Indies players passed out while playing the match against Pakistan. First Chinelle Henry collapsed on the field followed by Chedean Nation. Moreover both of them fell after few minutes of Pakistan run chase. The medical staff of the Caribbean team took the two players off the field on stretchers.

According to a statement released by CWI ( Cricket West Indies) both the players are stable now. “Chinelle Henry and Chedean Nation were taken to hospital for medical attention. Both Henry and Nation are conscious and stable at hospital and are being assessed.” The official statement of the board said about the players.

Courtney Walsh who is the head coach of the West Indies team opined : “It isn’t very easy in those conditions and situations. I’m just happy that the team was able to go over the line for those two ladies who weren’t with us. We’re just waiting on all the information that we can get. They have our full support and we’ll be riding with them as well.”

Meanwhile the captain of the opposition team Javeria Khan too provided support to the collapsed duo. She gave a statement which said :

“The thoughts and prayers of the whole Pakistan team are with Chinelle Henry and Chedean Nation. We wish them a quick recovery and are hopeful that we will play against them in our next match on Sunday. Such incidents are tragic and can shake whole dressing rooms. Hats off to the West Indies that they turned up and completed the match despite the grave incident.”

Earlier in the match, West Indies won by the help of DLS method by 7 runs. The Women’s team batted first and scored 125-6 in 20 overs. Kycia Knight made 30 in 20 balls and was the top scorer for her team.
For Pakistan it was Sana Fatima who took 2 wickets for 18 runs in 4 overs. She happened to be the pick of the bowlers.
In reply, Pakistan innings had barely began when the unfortunate incident of two players collapsing on the field happened. Furthermore there was poor weather which delayed the match. At the end of 18 overs, Pakistan were 103-6 and needed a further 23 runs to win in the final 2 overs.
However that is when rain returned. With no any sight of improving weather, the match was called off. Hence West Indies were declared the winner of the match as they were ahead by 7 runs on the DLS method.
With this win, the hosts won the 3 match T20 series as well by 2-0 with one game to go.
Watch the video of the incident here :