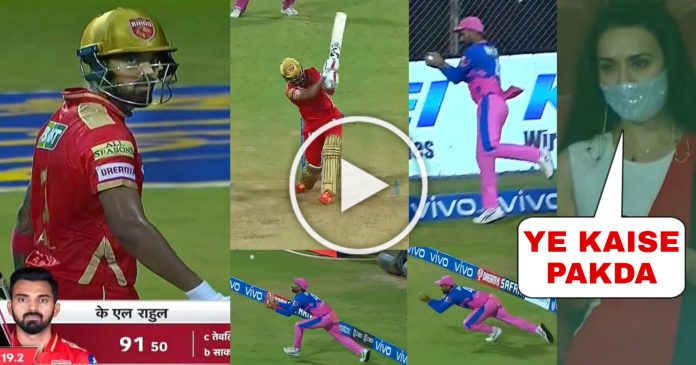 Rahul Tewathia took an incredible and unbelievable catch in the last overs of the innings of Punjab Kings. Such sensational was the catch it left everyone quite stunned. It was the death overs going on. KL Rahul after a slow start had found his grove. He was hitting the ball mercilessly and most of the times when he connected, it was a boundary.

The moment of the catch came in the 19th over. The first ball of the over was smashed over extra cover for a four as KL Rahul the skipper moved into his nervous nine tees. It looked as if it is just a matter of time before he would get to his hundred. It would have been the first hundred of this edition of IPL season 2021.

Second ball of the over was just short of a length. KL Rahul again made room and mowed it over mid wicket in the hope that it would go over the cow corner for a six. For a second, his thoughts were turning into reality as the ball was rapidly travelling towards the deep midwicket for a six.

That is when, Rahul Tewathia decided to intervene. The leggie from Haryana jumped at the last moment and caught the ball. Then, he quickly realised that the momentum will take him over the ropes. Acting with common sense, he released the ball before going inside the ropes. The ball was still in the air when Rahul Tewathia fell over the ropes.

Such quick reflexes were there from Tewathia that he instantly got up. Before the ball could die, he stood and dived full length as the ball fell. He took the catch inches off the ground in an astonishing manner. So confident he was with his catch that he gestured at that moment only that it is a fair catch.

Needless to say that the incident was referred to the third umpire. There also, it was clear that it was a genuine catch, after a couple of replays. It was confirmed that Rahul Tewathia had taken a blinder.