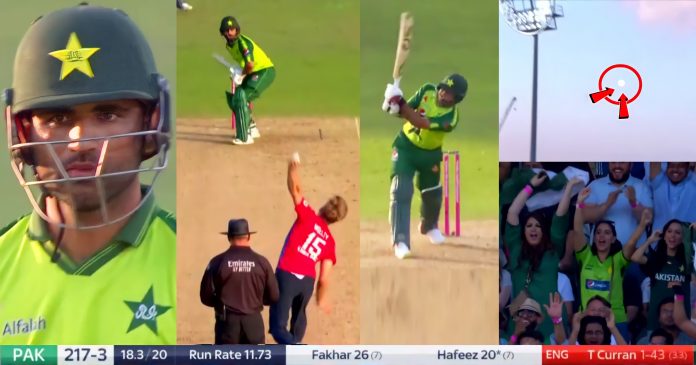 Pakistan and England are facing each other in a T20 series of 3 matches. Accordingly the first match of the series was played between the two sides at Trent Bridge in Nottingham. Winning the toss, English captain Eoin Morgan elected to field first. Little did he know that he was committing a blunder. On a belter of a track, Pakistani openers gave their team a dream start.

The opening duo of Mohammad Rizwan and skipper Babar Azam whacked the hosts to all corners of the park. Together they added 150 runs for the first wicket in just 14.4 overs. While Azam cracked a 50 of just 35 balls, Rizwan hit his 50 in 34 balls. Both the players matched each other in shot making as their similar strike rates suggest. Also, Pakistan completed their 100 in 11.2 overs.

Rizwan was gone after making 63 in 41 deliveries. He was followed by Sohaib Maqsood who chipped in with 19 in 7 balls. However the main impetus provided to Pakistan was by the middle order duo of Fakhar Zaman and Mohammad Hafeez. The former is a regular opener for Pakistan but batted in the middle order in the match. The gamble paid off big time as he treated English bowlers with disdain.

The left hander smoked 26 in just 8 deliveries with three sixes. All the 3 maximums came in on the leg side as Zaman took full toll of shorter boundaries on one side. Moreover the carnage happened in the same over bowled by Saquib Mehmood.

It was the 18th over of Pakistan’s innings. On the very first ball, Mehmood bowled a full toss and was duly dispatched for a six over long on. Three balls later, a short ball from Mehmood was deposited over square leg for second six of the over. On the very next ball, Zaman pumped another harmless short delivery for the third six of the over.

However the bowler eventually had the last laugh. In the last over of the innings he dismissed the rampaging Zaman. A full ball was hit straight to mid on by the batsman as his cameo of 8 balls ended.