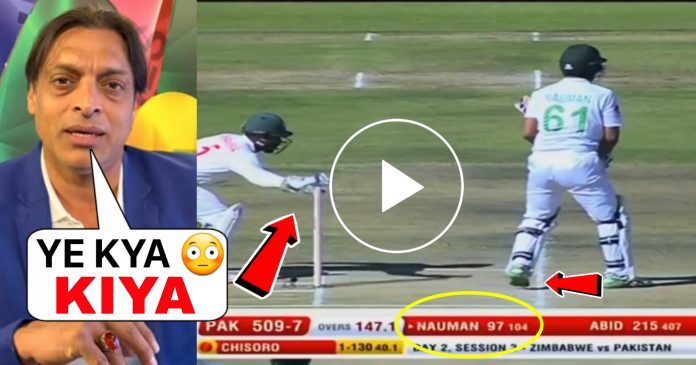 In the second test, Pakistan won the toss and elected to bat first. The opener Imran Butt was dismissed for a cheap score of 2 runs, at the team score of 12. However, after that Abid Ali and Azhar Ali added 236 runs for the second wicket. The two Ali’s took Pakistan to a commanding position. Both completed their respective 100’s.

Azhar Ali was dismissed for a well made 126 and he was sent back to the pavilion by Muzarabani. Then, Pakistan lost wickets in quick succession as skipper Babar Azam and Fawad Alam were gone for 2 and 5 runs respectively. The next two batsmen made were out after being set before Hasan Ali was gone for a duck.

Then, Nauman Ali who was batting at 9 and Abid Ali, formed a partnership of 169 runs for the 8th wicket. The two batsman piled on the runs on hapless Zimbabwe bowling. Abid Ali completed his double century as he made 215*. Nauman Ali was also moving towards his maiden 100 as he played some scintillating shots to move into the 90s.

Pakistan had crossed 500 and were at the score of 510 runs in 147 overs. The bowler was Tendai Chisoro and Nauman was looking to score his hundred. Chisoro bowled a wide delivery outside off stump as Ali looked to cut it through point. However, he could not reach that far and failed to hit the ball as it went into the hands of keeper.

Ali then became casual as he lifted his back leg and was relaxed, that there is no danger. However, the wicket keeper Regis Chakabwa was alert and as soon as he saw that the batsman backleg is out of the crease, he whipped off the bails in a flash. Before Ali could understand a thing, Chakabwa went to the square leg umpire for a stumping appeal.

The third umpire then checked the footage and found out that Ali’s foot was out side his crease, when the bails were off the stumps. Thus, he was adjudged OUT. Nauman Ali could not believe his dismissal, but he had to go to the pavilion. He made 97 runs in just 104 balls. It contained 9 fours and 5 sixes.

Pakistan declared the innings at the score of 510-8, when Nauman Ali fell on 97 and missed out on his century.

Watch the video of the stumping here:

Watch : Surya Kumar Yadav unbelievable incident. Umpires call him back after giving out.