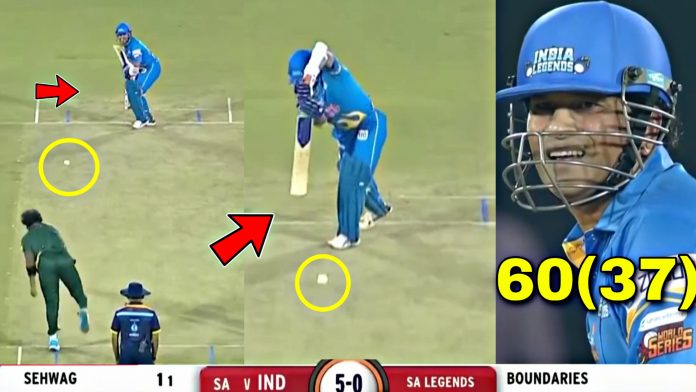 The India and England T20 series going on in Ahmedabad. There are four more games to go in the series as the first match ended yesterday. However, this is not the only kind of cricket going on in India between international teams.

The Indian openers Sachin Tendulkar and Virender Sehwag opened the innings for India. Virender Sehwag took the strike in the first over against former Proteas fast bowler Makhaya Ntini.

Makhaya Ntini started by bowling a single to Sehwag. The single was a typical Sehwag style single. He just carved it over the covers for what looked like a boundary but turned out, South Africa had a deep cover for that kind of shot only.

So, only a single came off the first ball.

Sachin was on strike the next ball. He flicked the next ball for a four through square leg via a flick shot. However, the following delivery was one which brought back memories of the Sachin of Old. The Sachin of Gold.

Makhaya Ntini bowled a length ball on the stumps. Sachin needed no second invitations as his instincts took over. The ball met a perfect high elbow and straight bat of Tendulkar. That shot left everyone in awe. This exact kind of straight drive was a hallmark of Sachin’s genius and his hallmark for his international career that spanned 24 years.

The shot brought back all the memories which Indian cricket fans and also Tendulkar’s fans. Memories from the 90’s and 2000’s when the little master was at his peak. The shot was a testimony to Tendulkar’s skill level that even after 7 years of retirement, he produced the same kind of shot which made most of the cricket lovers his fan.

Watch the video of Tendulkar’s vintage and gorgeous straight drive:

Watch Rohit Sharma gets hit in a painful blow to elbow. Replies the bowler...