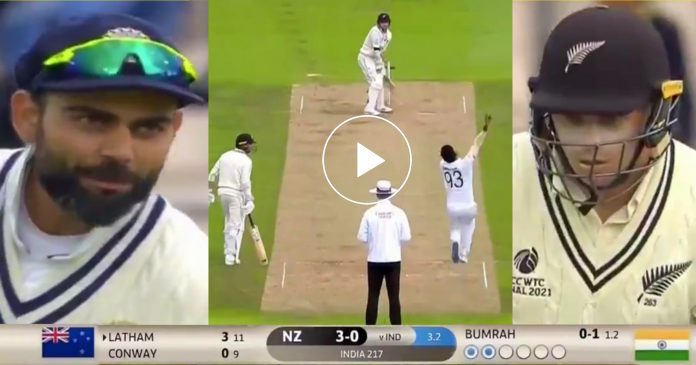 Virat Kohli is one of the most fiery cricketers going around in international cricket. He plays with his heart on his sleeve and does not shies away from showing his emotions. Whether he hits a century while batting or whether the Indian team gets an important wicket, Kohli is always at his energetic best. That aggression from Kohli was once again on display in the final of ICC World Test Championship vs New Zealand at Southampton. 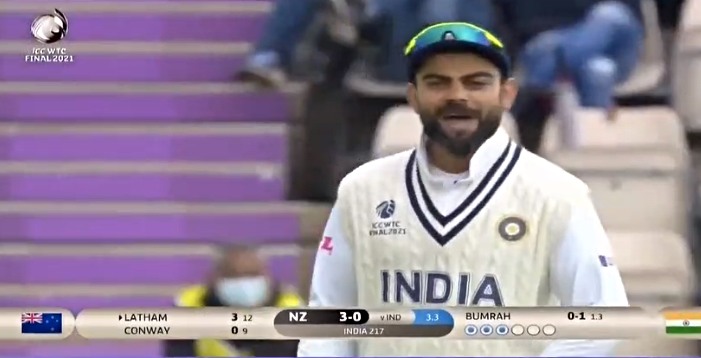 In the first innings of New Zealand on day 3, Tom Latham and Devon Conway were opening the batting for the Kiwis. After India were bowled out for a cheap score of 217 runs, they needed early wickets to put the pressure on New Zealand. However, the New Zealand openers are known for their resilience. Both of them like to play in defensive style rather than aggressive brand of cricket which might interest the opposition bowlers in pursuit of a wicket. Hence, India needed to think out of the blue to try and get a wicket from somewhere.

It was then the captain Virat Kohli who tried to take things in his own hands. He knew that neither of the Kiwis are likely to play a false shot. Accordingly he came up with an idea of breaking the concentration of Tom Latham. Consequently, inducing him into playing a false shot. Hence, Kohli started to sledge the left hander batsman when Jasprit Bumrah came to bowl.

Kohli can be heard saying in the video – “He got no idea Jas (Jasprit Bumrah). You are all over him buddy. You can make him up there as well. He knows he is not getting it on the bat, boys”. While saying these words, the Indian captain made sure that he is in the ears of Tom Latham and he is clearly audible to the left handed opener.

However, that sledging did not seem to affect the concentration of Latham. He dug his heels in and added a solid 70 runs for the first wicket with Devon Conway. The southpaw made 30 runs and was dismissed only by Ravi Ashwin after seeing off the new ball.