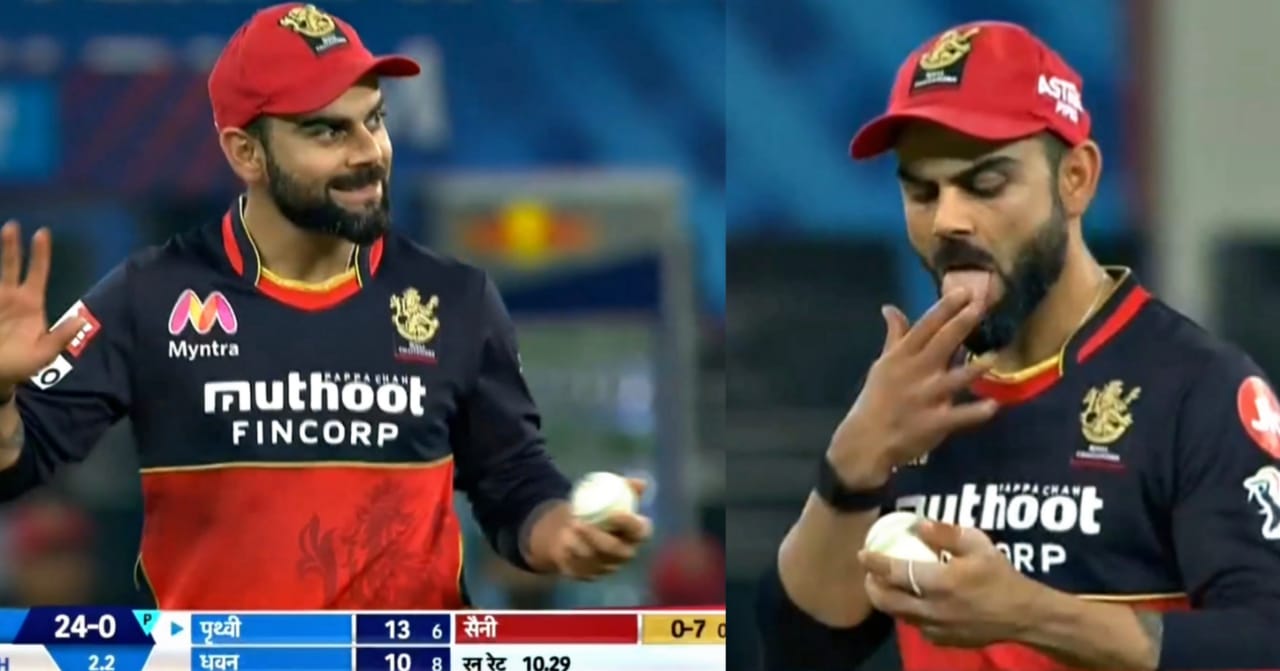 The rule has been in force since the cricket began amidst the pandemic. It is being followed across all cricket matches. The intention is to take all precautions to have a safe environment for playing cricket.

The incident happened during the third over of the match. Delhi Capitals opener Prithvi Shaw punched a pacey delivery from Navdeep Saini. The ball travelled with some speed to cover point. Virat Kohli stopped with ease and immediately he almost applied saliva onto the ball.

However, the skipper was quick to realize the new rule and restrained himself from applying saliva. He was quick to acknowledge and have a laugh.

BCCI have struggled to get IPL 2020 underway and it is good to see big players like Virat Kohli restraining from breaking rules. In these difficult times, it is important for all the stakeholders to strictly adhere to the precautionary measures put in place.

Having won the toss, Virat Kohli have asked Delhi Capitals to bat first. Both Prithvi Shaw and Shikhar Dhawan has helped their team with a flying start. The duo scored 63 runs inside powerplay as they took Royal Challengers Bangalore bowlers on very aggressively.

However, RCB bowlers were able to pull back the scoring rate by taking three quick wickets in immediate overs. The match is important for both the teams, as the winner will be at the top of the table. Rishabh Pant has been in great form in this IPL. Meanwhile, Virat Kohli also found his lost groove in the match against Kolkata Knight Riders.

He looked comfortable in the game as he scored his first fifty in IPL 2020. Both the teams have won three matches in their initial four games. The winner of this match will have eight points and will climb to the top of the points table. Delhi Capitals are going into the match without Amit Mishra. The talented spinner was ruled out of IPL 2020 after his finger injury on Saturday.

On the other hand, RCB are going into the match with two changes. Moeen Ali and Mohammed Siraj get their first game of IPL 2020. Adam Zampa and Gurkeerat Mann makes way for the duo.