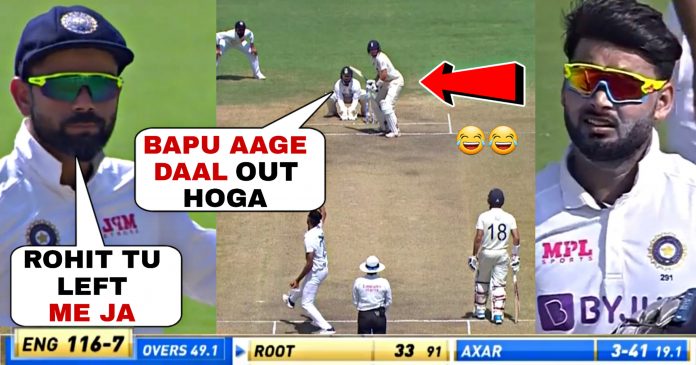 Indian cricketers Virat Kohli and Rishabh Pant were very vocal during the second day’s play in the second test. India were firmly on top after an impressive 329 on a turning pitch which offered plenty of assistance for spinners.

The hosts were dominant in the proceedings as they got wickets at regular intervals. Both Axar Patel and Ravichandran Ashwin were brilliant with their spin bowling. However, the talk of the social media has been the chatting of Rishabh Pant and Virat Kohli behind the stumps.

After comprehensively beaten by England in the first test, India are determined to make a strong comeback into the series. Captain Virat Kohli led from the front on the field as he constantly put pressure on England batsmen with his chatting around the wickets.

On the other hand, Rishabh Pant has been his usual self behind the stumps. Be it his suggestions or jokes, Pant has been viral amongst the fans. After being constantly compared with MS Dhoni for few years, Pant has finally become a fan favorite with his recent knocks.

If we keep on writing some of Pant’s jokes, this place will be out. The Indian cricketers were always in high spirits on the field when Pant is behind the stumps. He continues to keep bowlers motivated and close catchers tuned in with his words.

England batsmen had no answers to almost everything Ashwin threw at them. Wicketkeeper Ben Foakes and Ollie Pope has resisted for a time being but the duo were separated on the first ball of Mohammed Siraj in India.

The visitors bundled out for just 134 giving India a massive 195 run lead. Here are some of the best conversations caught by stump mic during the second day.

India are firmly on top of England after a brilliant display with both bat and ball in the first innings. The hosts will now look to close this test match quickly and fly to Ahmedabad.

The new Motera stadium will host India’s first ever Day Night test match in the country. With this test almost in India’s grasp, England will have to toil hard in the final two matches to ensure that they become the first team to defeat India at home in nine years.