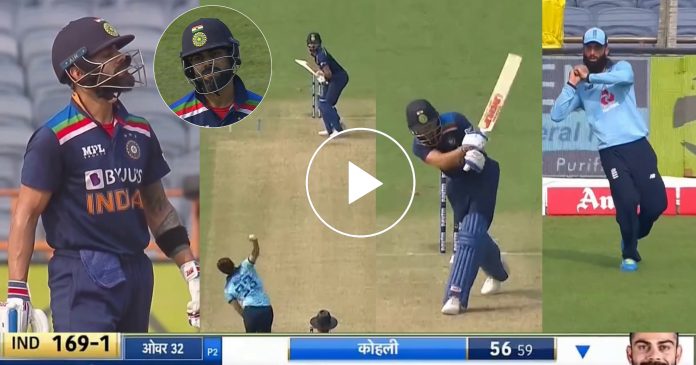 The Indian captain and superstar batsman Virat Kohli is, amongst the top three batsman in all three formats of the game. He is considered to be the best in limited overs cricket. Also, he is only marginally behind Steve Smith in tests.

However, the last time Virat Kohli hit a 100 in any format of cricket, was way back in 2019 against Bangladesh. Since then, the skipper has gone 42 innings across formats, without hitting a hundred. This is the longest streak of Virat Kohli in which he has not hit a century. That stat is since his debut for India in 2008.

In the first ODI, this scarcity of a hundred looked all set to end. Kohli was playing nicely and looked good for his 44th ODI century and, his 71st century in international cricket. But, Kohli fell shot of his hundred again. This means that the wait for a century from King Kohli, continues.

Coming at number 3, Virat Kohli started cautiously. India had got a solid base from, the openers Rohit and Dhawan when Rohit fell. Like in usual Kohli style, when he starts slowly and then picks up the pace quickly, as the innings move on, he hit a 50 and was coming into that dangerous zone for English bowlers.

But then, the best England bowler on display came to the crease to bowl. It was Mark Wood in the 33th over. He delivered a quick ball at Kohli’s pads, as instincts of the batsman took over. Kohli swiped that off his pads as the ball travelled in the air, towards deep square leg where the fielder Moeen Ali, was there.

The fielder made no mistake as he took it easily. It was a satisfactory moment for Moeen Ali as well because he had dropped Dhawan earlier in the game. Kohli was again out after he had reached his 50. After he was gone, the skipper admonished himself, for playing that shot. The certain hand gestures he made post the catch was taken, could be a testimony to that. He made 56 runs in 60 balls with 6 fours. His 50 came at exactly a run a ball.

Watch the video of Virat getting dismissed here: