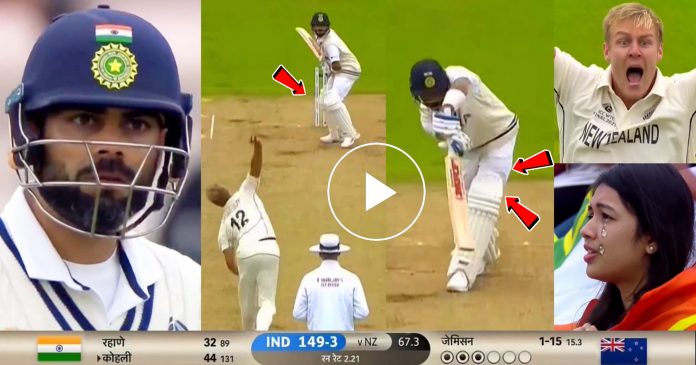 The start of day 3 in finals of ICC World Test Championship has been poor for India. Indian skipper Virat Kohli and deputy skipper Ajinkya Rahane were the overnight batsmen for India. All of the Indian fans were expecting the pair to score crucial runs and put pressure on New Zealand. However the Kiwis had other plans.

Firstly, the weather again was not kind as overnight rain meant a wet and soggy outfield. Yet again, the start was pushed back by half an hour as the umpires waited for the field to get better for play. Trent Boult started the proceedings for New Zealand and operated on some tight line and length bowling.

Both the Indian batsmen found it hard to negotiate the swing and seam in overcast conditions as Kiwis piled the pressure up. The Indian captain Virat Kohli looked in great touch yesterday as fans hoped he would push India to a good score and score his 71st century in the process. However, he fell victim to some great bowling by Jamieson.

The 6’7 inch Kyle Jamieson was India’s wrecker in chief when they toured New Zealand early last year. The right arm pacer had bulldozed strong Indian batting line up as the hosts comfortably won both the tests and won the series 2-0. Once again, Jamieson caused problems for India.

It was the 68th over of the innings and fourth over of the day as the lanky pacer Kyle Jamieson came to bowl. The first three balls of the over was just around off stump as Kohli let the ball go watchfully. However, it was the next ball when calamity struck. Fourth ball of the over was an incoming delivery at good pace. Hence, Kohli was beaten all ends up. The ball thudded into his pads as he played all around it.

A loud appeal for LBW was given instantly by the umpire. Kohli went for the DRS at the last moment but it was of no use as he was found plumb in front of the wicket. The Indian captain could not add anything to his overnight score. He was gone after making 44 off 132 balls.