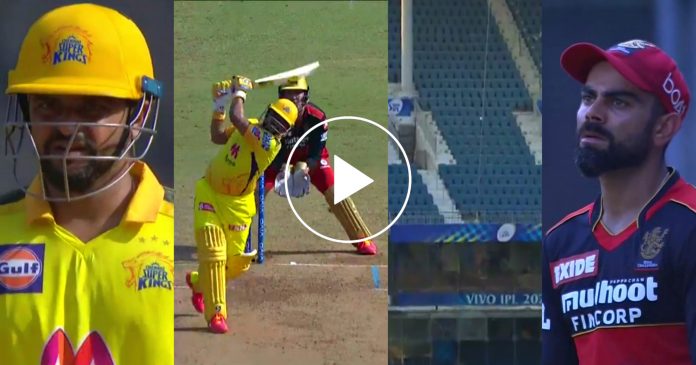 Chennai Super Kings are facing Royal Challengers Bangalore in the first match of Sunday’s double header. Chennai won the toss and elected to bat first. There openers, Rituraj Gaikwad and Faf Du Plessis played, some good shots. They took, Chennai to the score of 51 runs, after the end of powerplay, without losing a wicket.

For Bangalore, the bowling was opened by Mohammed Siraj and, Kyle Jamieson. The first boundary of the innings, came as early as the second ball of the first over. It was when, Du Plessis carved an over pitched delivery from Siraj into the offside.

The first six of the innings came in the third over. Du Plessis charged down, to Siraj and smacked a boundary over long gone for a six. Also, Ruturaj Gaikwad on the fourth delivery of the same over, thrashed Siraj for another boundary of the over. The runs had started to flow thick and fast.

Navdeep Saini who was playing bowling his first over of the match, was smacked for 14 runs in the last over of the powerplay, by Gaikwad and Du Plessis, as Chennai jumped their way  to 51 without loss.

Gaikwad first 6 came in the next over. On the last ball of the 7th over, he made a bit of room and launched, Chahal over his head for a straight six.

In the next wave of Chahal, he lost his wicket when, he tried to slog sweep him out of the ground, but ended up giving a catch to the square leg. He made 33 in 25 balls. Then, Suresh Raina at Number 3 came to bat.

On just the third ball, he faced, Raina ran down the track and smashed Chahal, over wide Long on for a huge six, that took Chennai to a score of 83 for the loss of one wicket at the end of 10 overs. After this 6, Kohli really got angry, with Yuzvendra Chahal, as he came to the bowler and said something like, why did you ball on that length? Even Chahal was a bit embarrassed, when Kohli said those things to him.

Watch the moment between Kohli and Chahal, here: