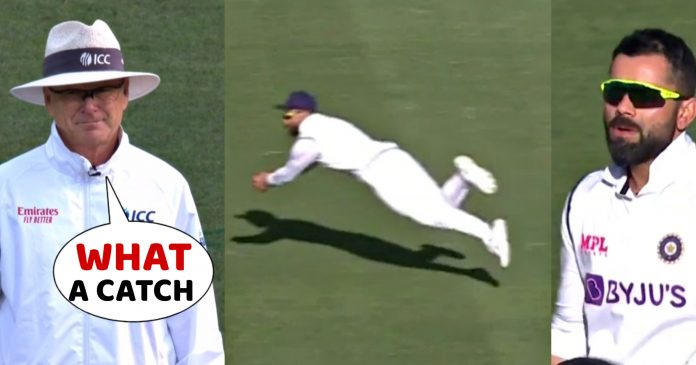 Virat Kohli has turned the first test match in India’s favor after pulling out a sensational catch to dismiss Cameron Green. Green was looking threatening in his short stay as he scored runs at a decent pace. He looked calm despite playing his first test match against one of the best test sides in the world.

Coming to the dismissal, Ashwin bowled the delivery slightly shorter and Cameron Green was very quick to pounce on it. He pulled it and the ball was travelling quickly to Kohli’s left.

But Kohli was quick and plucked the catch out of thin air. It was a sensational catch and the crowd in Adelaide Oval gave him a fitting ovation. Green was dismissed after scoring 11 from 24 balls.

Here is the catch

India are currently in a strong hold after getting running through Australian batting order. Jasprit Bumrah by dismissing the openers in the opening spell. On the other hand, Ravichandran Ashwin tilted the game in India’s favor after picking three wickets.

Considering India’s inability to dismiss tailenders in recent overseas series, it will be interesting to see if Australia can stage a comeback. A huge lead in the first innings will be in the minds of Indian cricketers.

The match is slightly in favor of India right now, but still a lot of cricket is left to play in this important match and series. Australia started off on a strong note at the start of the day. Their bowlers manage to dismiss remaining Indian batters within opening 30 minutes.

Starting at 233/6, India managed to post only 244. Indians were disappointed but came back strongly with the ball. Marnus Labuschagne remains the key wicket for India as he looked in complete control of his innings. He is inching towards his fifty and his wicket could be the difference maker for both the sides.