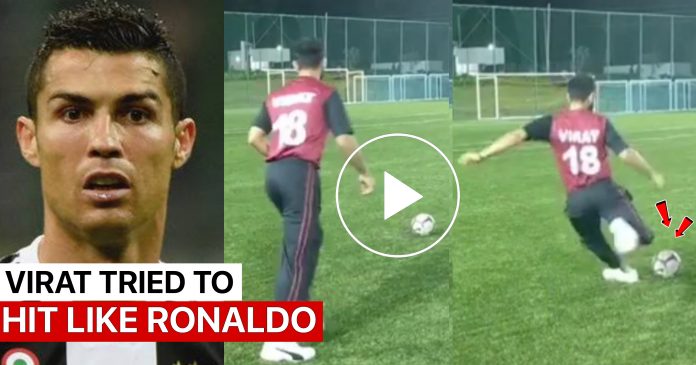 When it comes to Virat Kohli, there is hardly anything to say. His name is more than enough. The majestic Indian captain has such records to his name that only a few can match. Regarded as an all time great with few years of cricket still left in him, Kohli undoubtedly is the undisputed King of Indian cricket. Moreover, his win percentages amongst all three formats as Indian captain is the best since India started to play cricket. 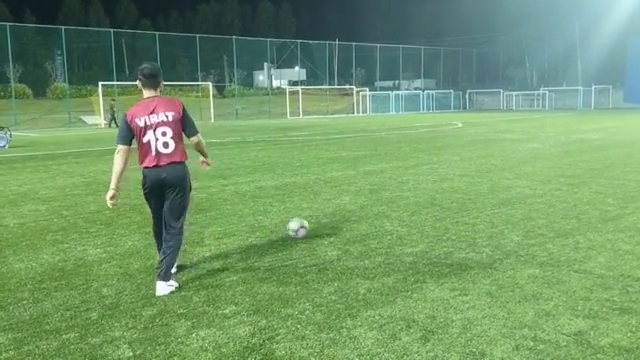 One peculiar thing about Kohli is that he loves to take challenges. Be it related to cricket or be it is associated with non cricketing activities, Kohli never shies away from a challenge. Moreover, he loves other sports as well beside cricket. He is an ardent fan of Roger Federer in Tennis and Christiano Ronaldo in Football. This is the reason an interesting video appeared on social media in which Kohli can be seen imitating Ronaldo.

The video is about Virat Kohli playing football. He is seen in a Football field at night with the ball. There, Kohli puts the ball at the ground as he takes an aim at the goal post. The direction of the ball was a bit horizontal of the goal post. Hence, Kohli runs in from few steps and kicks the ball across, like a pro football player.

Seeing this, Virat covered his face with his palms and let out a roar of disbelief. It was an amazing moment by Kohli, this time on a football field, rather than on a cricket field.

Meanwhile, India is scheduled to depart to England on the 2nd of June under the leadership of Virat Kohli. The Indian cricket team will play a total of 6 test matches in England across two series. They will play against New Zealand from 18th June in Southampton, which will be the final of World Test Championship. Then, India will be up against England for a series of 5 test matches, which will begin from 4th of August.

Watch beautiful fan moment of MS Dhoni. His feet touched by a fan.