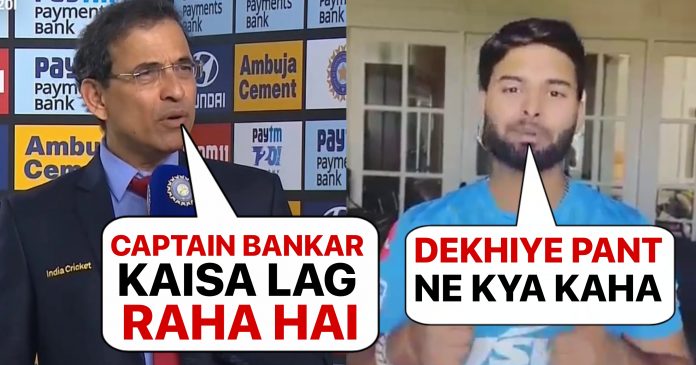 Rishabh Pant stature in international cricket, has grown by leaps and bounds in last few months. Since the time Pant played that match winning knock of 89* at the Gabba, Brisbane, his performances for India has been brilliant to say the least. After a lull, when he was dropped from the team due to poor returns, its safe to say that Pant has finally arrived.

Now, the icing on the cake in Rishabh Pant’s professional career, is his promotion in the Indian Premier League. The exciting keeper batsman from Roorkee is now, the captain of the Delhi Capitals and will lead the team in this edition’s IPL. Pant has been given the post in absence, of regular captain Shreyas Iyer. The regular captain is, out of the entire tournament due to shoulder injury.

When Iyer was injured and was ruled out of IPL 2021, there were quite a few options for Delhi Capitals to chose there captain from. This includes R Ashwin, Ajinkya Rahane or even Steven Smith, the new recruit to the squad of Capitals. Ashwin and Smith even have the experience, of captaining their IPL franchises at various points of time. Meanwhile, Rahane led India to a historic test series, victory in Australia earlier this year.

However, the management of Delhi Capitals, went in with Rishabh Pant, all of 23 years old as their chosen man to lead the team. After taking over the reigns, Pant said in an official statement which came out on social media which said:

“Delhi is where I grew up, and where my IPL journey began six years ago. To lead this team one day is a dream I’ve always harbored. And today, as that dream comes true, I feel humbled. I am truly grateful, especially to our team owners, who considered me capable enough for this role. With an amazing coaching staff, and a plethora of accomplished seniors around me, I can’t wait to give my absolute best for Delhi Capitals,”

Since, there are many senior players in the Capitals squad, choosing Pant over them to lead the team is an interesting move. Hence, it will be worth the wait to find out about what Pant can do, in leading the team. Moreover, will his leadership be as funky and exciting as his batting? this will be the question which all of Pant and, Delhi Capitals fans would be willing to see.

Reactions and messages to Pant

As soon as Pant became the captain, reactions from the players and coaches started to pour in. Shreyas Iyer was the first man to congratulate Pant. He said:

“When I sustained the shoulder injury, and Delhi Capitals needed a leader for this edition of the IPL, I had no doubt that Rishabh (Pant) would be the best man for the job. He has all my good wishes to make amazing things happen with our absolutely incredible team. I’m going to miss the team tremendously, and will be cheering for them throughout”.

Suresh Raina too conveyed his message, to Pant in a tweet which read:

“Heartiest congratulations to @RishabhPant17 on being named the captain of @DelhiCapitals for this season. I am sure he will be a talismanic leader and will be donning this new cap with pride”.

The coach of Delhi Capitals also wished Pant, for success on his new role. He tweeted a message which said:

“Unfortunate that Shreyas will miss the tournament, but looking forward to seeing @RishabhPant17 grab his opportunity. It’s well deserved for his recent performances and he’s coming in with a lot of confidence. I’m convinced captaincy will make him an even better player.

“The previous two seasons under Shreyas’ leadership have been incredible, and the results speak for themselves. This is a tremendous opportunity for young Rishabh, who is coming off successful stints against Australia and England which will no doubt give him the confidence needed to take on a new role that comes with a lot more responsibility. The coaching group is excited to work with him, and we can’t wait for the season to get started.”

Delhi Capitals first match will be vs Chennai Super Kings on 10th of April. It will be played in Wankhede stadium, Mumbai.

The statement of Pant on his captaincy stint is here. Watch!

Humbled at the opportunity to lead the franchise I've been part of for the past few years! Thank you @RickyPonting , the coaching staff, management, my teammates and the fans for your faith in me. @DelhiCapitals : Let's do this! #IPL2021 pic.twitter.com/zeais9AGIO