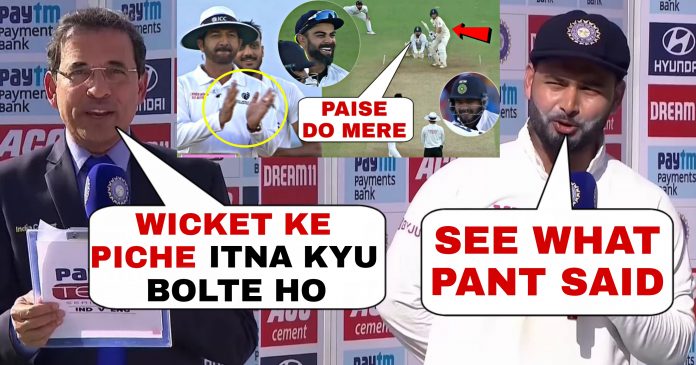 In the last two series, the form and persona of Rishabh Pant has gone to another level. First his heroics in Australia helped India win the series down under after they were trailing by 0-1 post Adelaide test. After that, there were high hopes on Pant to repeat the performances at home.

Pant hasn’t had many opportunities at home in India. The two reasons for that happening was plain due to superior keeping of Riddhiman Saha at home on Indian pitches and Pant’s average keeping on Indian grounds.

The only factor which worked in favor of Pant was his batting which is too good when compared to Saha. Going in by the form, Pant was included in the team instead of Saha. And by the time the series ended in Ahmedabad, Pant made sure that no one would question the decision of playing him in final 11.

After an insipid start in the first test in Chennai where India lost to England, the Indian team roared back in style.

As the Indian team won 3-1 by winning three consecutive tests, there were many standout performers. The biggest of them was Axar Patel who took 27 wickets in just 3 games at an astonishing average of 10.8!

Ravichandran Ashwin, the man of the series, did well in both batting and bowling. He scored 189 runs at an average of 31.5 while gobbling up 32 wickets at an unbelievable average of 14.8.

Rohit Sharma was another outstanding performer for India. He was the only top order batsman from either sides to hit a century. No wonder he was the highest scorer for India in the series at an average of 57.25.

However, the star of the final game was none other than Rishabh Pant. His rollicking century came at a time when the game was in firm balance and could have gone in either way. But Pant by his daredevilry made sure that India seize the momentum, the match and the series. After he hit a century, the match could have gone only one way. India’s victory!

With a lead of 160 runs and the pitch turning and bouncing like a pit, it was just a matter of time for India’s spinners to knock over the English batsmen.

As expected, both Ashwin and Axar ran through the England batters. Both picked up five wickets each as the opposition team was bundled out on a paltry 135. For England, Dan Lawrence was the highest scorer of the innings and the match as he made a well composed 50 to go with his 46 runs in the first innings.

For his outrageous batting, Rishabh Pant was adjudged the man of the match.

While receiving his award, Pant was asked by the presenter some thing which a lot of his fans would have asked him.

He was asked that what does he thinks about his one liners and commentary from behind the stumps to the extent that people sometimes ask even the commentators to turn their mikes off when Pant is commentating!

To this Pant replied in his true style – “Ab mujhe ni smjh aa raha ki ye mere liye compliment hai ya apko problem ho rahi h?” ( I don’t know whether its a compliment or its you who have a problem with my commenatry)

When Pant said these words, there was one big laughter from the Indian contingent. None so more than the presenter himself, Mr Harsha Bhogle!

Watch the video of this conversation, here – :