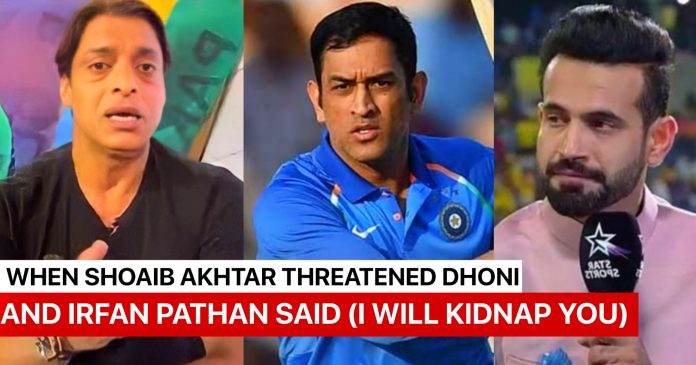 Former Pakistani express bowler Shoaib Akhtar is widely regarded as the quickest ever pacer to have stepped onto the cricket field. The right hand fast bowler is the only player to have delivered a ball over 100 miles. Moreover he achieved the feat in 2003 World Cup against England in a league game.

Akhtar took around 450 wickets in an international career that was in motion from 1997-2011. Accordingly at his pomp, nothing was more intimidating than the pacer. Furthermore his average deliveries would be 150kms which is quicker than fastest deliveries of some pacers in their career! No wonder that with such extreme pace, Shoaib was all about hostility, brashness and aggression.

Often he would lose his cool on the field and clashed verbally with the opposition batsmen. Consequently being a hot headed, he would do things that doesn’t necessarily fall in spirit of cricket. Trying to scare the batsmen with his antics was one of them. This post is about one similar incident when Shoaib tried to intimidate Dhoni and Irfan Pathan by engaging in extreme sledging.

India was touring Pakistan for a series of 3 tests and 5 ODIs in 2006. The first test was a draw. In the second test Pakistan had scored 588 runs and India in reply were left at 281-5. Irfan Pathan joined MS Dhoni at this precarious position. The bulk of the damage was done by Shoaib Akhtar and he was looking dangerous. Bowling deadly bouncers on a flat wicket, the pacer was making life uncomfortable on the pitch.

Hence Irfan Pathan decided to counter Akhtar with a plan. He said to Dhoni that to irritate Akhtar and get him off his line and length, he would sledge him and MS needs to just laugh in a taunting manner. Pathan started sledging him and Dhoni laughed as per the plan. After a couple of times, Akhtar got frustrated and yelled at both of them ” tum dono ko aguwa kar lunga.” ( I will kidnap both of you )

Fortunately for the Indian team the plan of Pathan worked. Accordingly the mercurial pacer soon lost his effectiveness by being over aggressive. Hence both the batsman added more than 200 runs as they took India out of danger. Consequently the match ended in a draw.

Watch the video of the incident here :