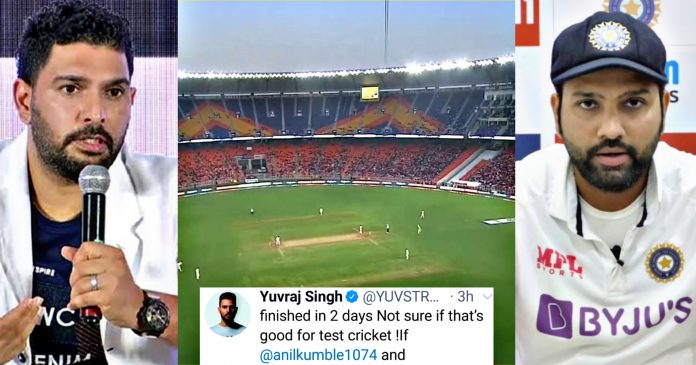 Yuvraj Singh, the former India star was mercilessly trolled for his comments on the recently concluded third test. The match ended in just two days. Both the teams could not handle the turn and roughness of the wicket as the spinners ran amok.

England were dismissed for 112 in the first innings. In reply, India were bowled out for 145 runs with a slender 33 run lead. England needed a score of more than 200 to set India a target in excess of 175, which could have created problems for them.

However, England played shocking cricket in the second innings. They were shot out for 81 runs. It is the lowest ever score of England against India. Axar Patel was the star for India with 5 wicket hauls in both the innings as he finished with a match haul of 11-70.

The result of the match in just 2 days has created a bit of controversy. A lot of former and current players as well as fans have weighed on the quality of the pitch.

While some of them have supported the pitch and blamed it on the poor technique of the batters, some have criticized the wicket. They believe that there was too much turn in the wicket. It made life miserable for the batsman. The pitch they say, was a lottery and did not meet up to the expectations of a good test wicket.

Former England captain Michael Vaughan called the wicket as ‘Shite’ and called for each batsman to give three innings to each of them. However, Graeme Swann, the former English spinner told that the wicket wasn’t at fault but the preparations of England team were poor. He questioned the management about the fact that they played with just a lone spinner on a turning track.

Kevin Pietersen chipped in with the view that the it was just the batsmen form both sides who played horribly rather than the pitch. Same view was mirrored by Indian legend Sunil Gavaskar.

Both Rohit Sharma and Virat Kohli too held the same view as KP. They came up with the notion that the pitch was not to be blamed but the mindset of batsmen from both teams.

However, none of the comments by the ex and current players created as much controversy as the one by Yuvraj Singh did. The former Indian player said in a tweet – The match finished in just 2 days. Not sure if that is good for test cricket. What would have happened had Anil Kumble and Harbhajan Singh bowled on these wickets?

finished in 2 days Not sure if that’s good for test cricket !If @anilkumble1074 and @harbhajan_singh bowled on these kind of wickets they would be sitting on a thousand and 800 ?🤔However congratulations to 🇮🇳 @akshar2026 what a spell! congratulations @ashwinravi99 @ImIshant 💯

In other words, Yuvraj questioned the quality of wicket without directly blaming it. This view of Yuvraj wasn’t taken well by the Indian fans. They quickly lined up on twitter and started calling out Yuvraj Singh for his opinion.

One fan said in a tweet that when Yuvi scored 36 runs in an over, did he blame the pitch for being too batting friendly?

Other fan said that instead of rating the pitch as poor, the batsmen should be called out for being poor against spin.

Overall, one can say that his opinion on the wicket hasn’t being taken too well by the fans of Yuvraj and supporters of Team India.

Watch : Funny voices of MS Dhoni during his international career