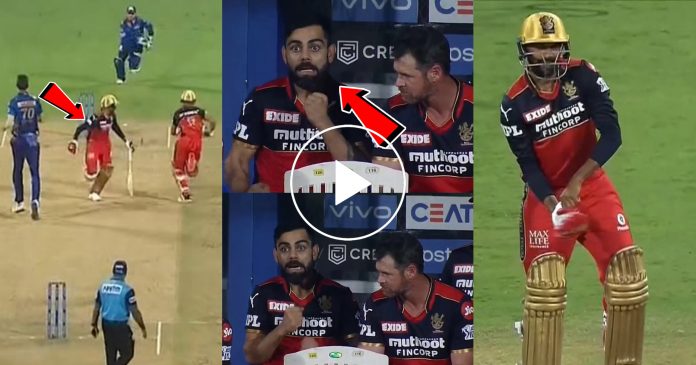 Royal Challengers Bangalore won, the first match of the IPL season 2021. They, beat Mumbai Indians by 2 wickets. It was a nail biting contest that, went to the last ball of the match. In the end, RCB prevailed by 2 wickets. Mumbai Indians continued, their trend of losing the first match of the tournament. This was their eighth, successive loss in first game.

Royal Challengers had won the toss, and elected to field first. Mumbai Indians never, really got going in their innings and managed just 159-9, in their allotted 20 overs. None, of their big hitters could time the ball on a pitch, that was slightly two paced. Chris Lynn, who was debuting for Mumbai Indians was the top scorer for them.

Lynn made 49 runs and missed out on, a well deserved half century by just, a solitary run. Washington Sunder took, a brilliant catch running backwards, to dismiss him. Surya Kumar Yadav was the next highest scorer for, Mumbai with 31 runs. For Royal Challengers, Harshal Patel took a fifer and was particularly effective, in the death overs.

In reply, Royal Challengers were favorites for victory, when Kohli and Maxwell were batting. Maxwell, who was playing his maiden innings for the franchise looked good, from the start. The Australian athlete made 39 in 28 balls that, contained typical Maxi’s shots for sixes. One was a colossal six of 100 meters, that went out of the stadium. The other one, was reverse swept for a six!

However, both Maxwell and Kohli departed in quick succession. Two more wickets in the form of Ahmed and Christian followed, as pressure mounted on RCB. Then, AB De Villiers took charge of the situation and hit, some much needed boundaries to take RCB, to the doorstep to victory. But, with just 2 runs to win, he was run out.

With 2 runs still required for victory from 2 deliveries, Mohammad Siraj came to the strike to join Harshal Patel. Both teams were under pressure, and it was visible in the body language of both the teams. Then, suddenly camera panned to Royals skipper Virat Kohli.

Kohli actually wanted, the attention of Siraj towards him. He, raised his hand and kept waving at Siraj until he, looked at him. As soon as he looked at Kohli, he gestured with his hands to run. It conveyed him the message, that no matter what, just run whether you hit with the bat or not.

That would bring Patel on strike, for final ball who is a much better batsman. It, would increase RCB’s chances of victory. That happened exactly, as Kohli wanted as Patel took a single on last ball to, seal the game for them.

Watch the video of Kohli’s gesture:

Watch Rohit Sharma talks with Jayant Yadav on how to bowl to Gayle. He...