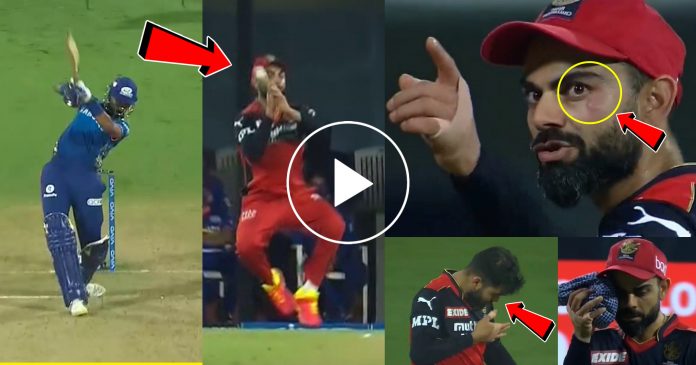 Virat Kohli had, a massive injury scare in the first match of the IPL 2021. The incident, happened during the 19th over, of the innings. Mumbai Indians, were sitting pretty at 146-5. Krunal Pandya and Kieron Pollard, were batting at the crease. Royal Challengers Bangalore brought in their new recruit Kyle Jamieson to counter, the two big hitters at the death.

On the first ball of the over, Jamieson bowled a hard length delivery, to Krunal Pandya at a good pace. Pandya the batsman, played an on the up drive and tried, to loft it over mid off. However he failed and the ball went straight, to the fielder at mid off. Virat Kohli, the man stationed there and tried to catch it, standing there with his fingers pointing upwards.

Kohli gets injured in the eye!

But he misjudged the trajectory, and the pace of the ball as it bursts, through his fingers. The ball then struck him right above the eye, and it was a painful blow to, Kohli by his reactions. Immediately, the eye was swollen as water came out, of his right eye. With so much cricket coming up in the, near future in both IPL and international cricket, fans of Kohli, RCB and Indians would be hoping, that the injury is anything but serious.

Earlier, RCB captain Virat Kohli won the toss and, decided to bowl first. It proved to be a great decision, as the opener and captain Rohit Sharma, was run out in the fourth over itself. He was caught in a, massive mix up with Chris Lynn, the other opener. Mumbai lost their first wicket on 24 runs.

After that, Surya Kumar Yadav and Lynn, took the initiative of scoring the runs without losing any more wickets. They compiled 70 runs for, the second wicket and were looking good for more, when Yadav was dismissed by Jamieson, for his first wicket in IPL.

Mumbai lost a bit of steam, in the middle overs as Lynn, Hardik Pandya and Ishan Kishan all departed soon. None of them, could stay at the wicket as Mumbai lost, wickets regularly and a score of 94-1 became 145-5. A target, which could have been in excess of, 180 was suddenly looking down to 160.

Watch the video of the unfortunate incident here: