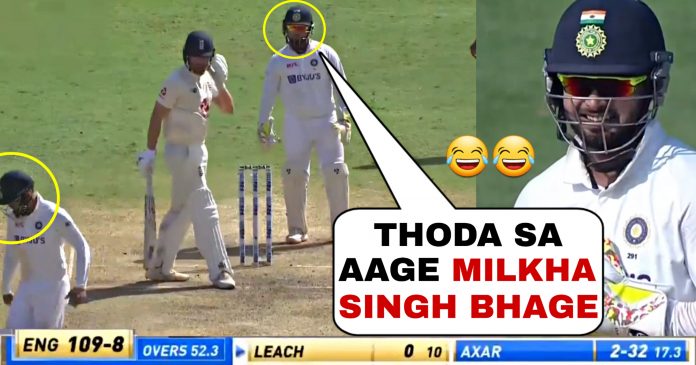 Indian cricketer Rishabh Pant has come a long way in the last two months. After being constantly compared to MS Dhoni in previous years, Indian fans have finally embraced Pant with open arms.

The southpaw was in sensational form with the bat for India in recent months. On the other hand, he was world class with the glove work on a tough turning track in Chennai. These factors are slowly making him a fan darling.

One of the main things which fans are liking about Pant is his non stop josh behind the stumps. He tries everything possible to keep his teammates in high spirits and it is showing it in the results.

Rishabh Pant once again came up with a gem when he was keeping in Axar Patel’s bowling. After India were on top in the first innings, Patel came onto bowl in the 53rd over. He was bowling to Jack Leach in an attempt to clean the tail up quickly.

This was caught on stump mic and immediately came to the notice of fans on social media. It was hilarious yet he ensured the message was passed onto Axar to put the ball much fuller than he did.

Rishabh Pant was criticized for his keeping skills in recent seasons. However, he is showing constant improvement behind the stumps. He took two brilliant catches in the first innings and continued his impressive form with gloves in the second innings as well.

Pant affected two tough stumpings in the second innings, bringing in memories of MS Dhoni. Although, his keeping is still work in progress, he is constantly evolving which is a good thing for Indian fans.

After thrashing England in a comeback win, India are now focused on pink ball test match in Ahmedabad next week. Immediately once the second test was completed, few Indian batsmen including Pujara hit the nets in Chennai with pink ball. It will be an exciting contest in the newly constructed Motera stadium in Ahmedabad.

Watch MS Dhoni hits a huge 6 while training. The ball goes out of...