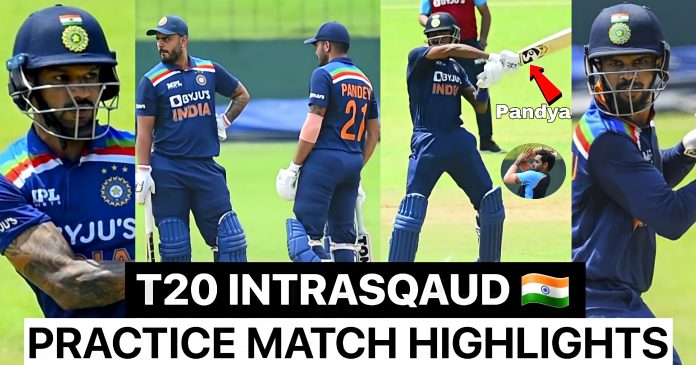 The India vs Sri Lanka limited overs series is going to begin in just about a week’s time. Indian team led by Shikhar Dhawan has a lot of youngsters and new faces who would be itching to go out there and perform. The reason team India has gone to Sri Lanka with a bunch of rookies is that the main and senior Indian players are busy in England. India is scheduled to play a test series of 5 matches from early August. Hence, BCCI decided to send a different team to Sri Lanka consisting of IPL and first class cricket stars.

Ahead of the ODI series, India has started intense preparation for the 3 matches. Accordingly, the Indian team played an intra squad practice match. The total of 20 players were divided into 2 different teams as they clashed with each other. While one team was led by Shikhar Dhawan, the other team was captained by Bhuvaneshwar Kumar.

A productive day in the field for #TeamIndia during their T20 intra squad game in Colombo 👌 👌#SLvIND pic.twitter.com/YLbUYyTAkf

The BCCI has uploaded few pictures from the match on their official Twitter account. One of the picture has Shikhar Dhawan in it playing a shot. In another two pictures, Ruturaj Gaikwad and Manish Pandey are batting as wicket keeper Ishan Kishan is keeping the wickets. The fourth picture has Bhuvaneshwar Kumar about to deliver the ball as Manish Pandey looks at him standing in non strikers end.

India will play their first ODI against Sri Lanka on 13 July at Colombo. This is the first time that Rahul Dravid will be the coach of India. Hence fans are looking forward to see just how the team performs under the guidance of former Indian great Dravid.

Earlier Dravid has successfully coached India A and India U19 teams. Both the teams won important tournaments while Dravid was the coach of these teams. Currently he is working as the Director of Cricket Operations at National Cricket Academy, Bangalore.

It is not clear if India will play any more intra squad practice match on the tour. After the end of 3 match ODI series, the Indian team will play a short series of 3 T20s vs the hosts. The tour ends of 25 July.