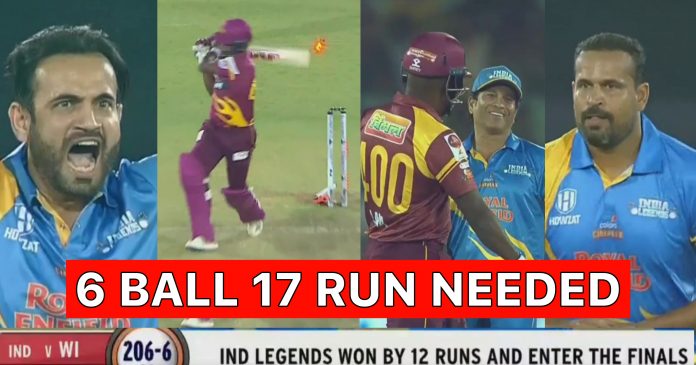 India won a heart stopping semi final against West Indies as they reached the finals of the tournament in some style. The Indian legends defeated West Indies legends by a margin of 12 runs. It was a close game which went right down to the wire.

West Indies gave themselves a strong chance to seal the deal at halfway mark. They were looking favourites to win the game as they reached 108-1 in 10 overs. With two set batsmen at the crease, it looked that West Indies would canter to victory.

Match flips on its head

However, the match turned on its head when Dwayne Smith was dismissed by Irfan Pathan in the 11th over. That put a brake on the run rate of the West Indians as the pressure increased.

Brian Lara then played a few eye catching strokes and a counter attacking innings. He brought down the equation to 32 off the final three overs. The last three overs were bowled by MS Gony, Vinay Kumar and then Irfan Pathan.

Each of them bowled with all their heart as India conceded just 19 in final three.

While Gony gave a mere 7 runs, Vinay Kumar in the penultimate over allowed only 8 and with all important wicket of the captain Brian Lara who was looking in good touch.

The final over drama

The drama however was reserved for the last over which Irfan Pathan bowled. With 17 runs to defend in the last over, Irfan bowled a brilliant over to choke the runs of West Indies batsmen.

The batsmen on strike were Mahendra Nagamotoo and Narsingh Devnarine.

First ball of the 20th over was a precious dot as Nagamotoo swiped and missed an attempted heave. The second ball was hit for a single.

On the third ball, Devnarine tried to hit one big shot but totally mistimed it. He then tried to run for a brace but was run out.

With 15 runs required of the final 3 balls, the batsman had to hit a big shot. However, it was not to be. Benn missed his shot as the ball raced through his swipe to the keeper for a dot.

The match was sealed. The final two deliveries were pretty much useless as West Indies could not have won the match from there.

India won the heart stopping semi final match by 12 runs and reaches the final. The final will be played on 21st of March in the same stadium.