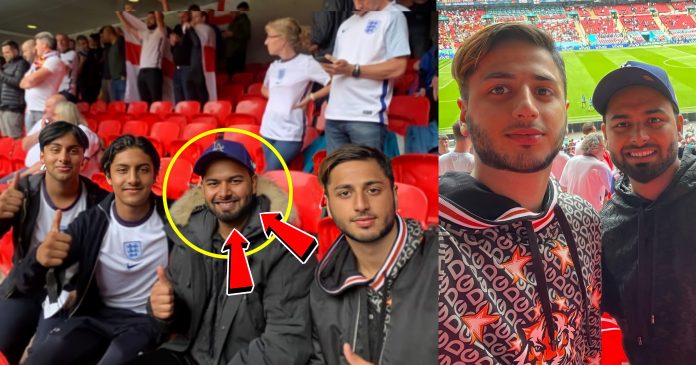 Team India suffered a heart breaking loss in the finals of World Test Championship. Post that, the next assignment of Indian team is a 5 test series in England vs the home team. This series begins from 4th of August so still there is a long time in that. Consequently, the Indian team members having a 20 day break. Hence, the players are out of the bio bubble and enjoying their time in England.

While many are having a tour of England with their families, some others are finding different ways to get themselves rejuvenated. In a similar case, star Indian wicket keeper Rishabh Pant was having his time out in England. The explosive left hander went at the Wembley Stadium to watch England clash with Germany in the pre quarter final of Euro Cup – 2020.

The Euro Cup is one of the most marquee tournament in international Football. As the name suggests, only the European nations participate in it. Since Football is the most popular game in entire Europe, fans go crazy when this tournament is on. Additionally, football takes center stage over every other game.

In the match, hosts England defeated Germany by 2-0 to reach Quarter final as Germany was dumped out. The captain Harry Kane and Raheem Sterling scored a goal each to win the game for England. They will meet Ukraine in the Quarter Final.

Rishabh Pant uploaded a picture of him alongside a friend in the Wembley stadium. In the background, one can see the ground where the football teams met. On an Instagram post, Pant wrote – “Good experience watching football “.

However, while getting the pictures Pant did not have a mask on on his face. Hence, he became a target of fans who trolled him for the same. While some others asked him to concentrate on cricket and his batting so that India don’t lose the match again. It is known that Pant played poor strokes in both the innings of the final of World Test Championship.

In the first innings, he scored just 4 and was out while trying to drive away from body. In the second innings he made 41 runs and was dismissed when he tried to smash a six. After he was gone, the Indian innings folded in no time.

Watch a huge six by Rohit Sharma. The ball disappears