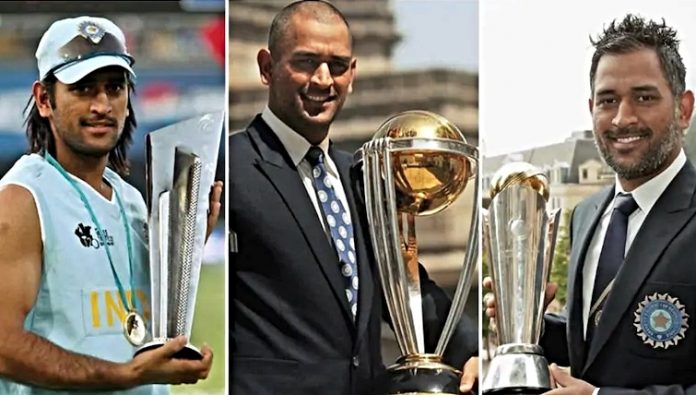 The former Indian captain MS Dhoni is widely regarded as one of the finest captains ever in international cricket. Often nicknamed as ‘Captain Cool’ Dhoni won India many games due to his astute captaincy. Hence, it resulted in India winning as many as 3 major ICC trophies under his leadership. Accordingly the Indian team won T20 world cup in 2007, 50 overs World cup in 2011 and Champions Trophy in 2013.

On Dhoni’s 40th birthday, ICC has uploaded few of Dhoni’s most memorable moments on field. Consequently the video went viral in no time as fans loved it and gave immense positive reaction on it.

The first visual from the video is of 2007 T20 World Cup. India was playing Pakistan in the finals and it came down to the last over. 13 runs were required as Misbah hit a six to Joginder Sharma and then holed out to short fine leg. Hence India won the match by 5 runs and became the inaugural champions of the World T20.

Another visual has a glimpse of the 2016 World T20 between India and Bangladesh at Bangalore. Batting first, India could only manage 146 runs in 20 overs. In reply Bangladesh faltered after a good start. Consequently it came down to last 1 ball where the tourists needed 2 to win and 1 to tie. Hence the best of Dhoni’s captaincy was seen when he took the gloves off in anticipation of a run out. Moreover it happened exactly as per planned.

The last batsman missed the ball and ran for a bye to tie the match. However Dhoni was more than ready for it and ran with the ball after collecting it. Further Dhoni broke the stumps before the batsman could reach the strikers end and he was run out. As it happened, India won the match by 1 run.

Another clip contains the most talked about decision of Dhoni’s career. It was promoting himself to number 5 in the finals of the 50 overs World Cup. India were chasing a target of 275 runs and had lost 3 wickets for 115 runs. For the first time in that tournament Dhoni came up at 5 ahead of the regular Yuvraj Singh.

The rest as they say is history as Dhoni played one of the most magical innings by the captain in an ICC final. He made 91* and finished off the game and the tournament by dispatching a six over long on. That shot still gives goosebumps to many Indian fans.

There’s a reason they call him Captain Cool 😎

On his birthday, relive some of MS Dhoni’s greatest calls as @BCCI skipper 👨‍✈‍ pic.twitter.com/8nK5hvTuWM