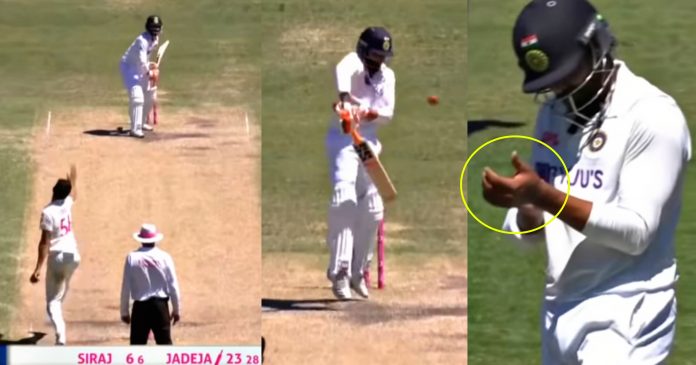 India have lost their way in Sydney test after a poor batting display. Australia were on top at the end of third day thanks to some brilliant fielding on the day.

They inflicted three run outs which can be considered as a cheap way to lose a wicket in test cricket. However, there is more concern for India beyond this test match. Firstly, wicketkeeper Rishabh Pant suffered an elbow injury while batting.

The talented batsman counter attacked Australia during his stay but suffered a blow to his elbow. A bouncer from Cummins evaded Pant’s pull and hit his elbow and the 23-year old was in immense pain.

He continued batting before getting dismissed but his hand was strapped up. Pant did not come out onto the field during Australia’s batting. As per the BCCI statement, he was sent for scanning to analyze the damage to his elbow.

But that was not the end of India’s injury concerns. Jadeja batted brilliantly to take India closer to Australia’s total. He scored some crucial runs to reduce the massive lead Australia was looking at.

However, the scary moment came in the 99th over when Starc bowled a bouncer targeting Jadeja’s body. Although Jadeja did well enough to negotiate the bouncer, he was caught on the thumb.

He immediately removed his gloves in pain and physio came running in to assess the situation. It hit his left hand thumb and it could affect his bowling. He is yet to bowl in the second innings after suffering the injury.

Meanwhile, Australia stamped their authority on the outcome of the test match. The third day could well define which way the series has tilted. The hosts were in complete control on the proceedings.

After amassing a lead of 94 in first innings, Australia finished on top at stumps with 103/2. They will declare tomorrow and will give India at least 4 sessions to bat. It will take a miracle for India to salvage even a draw from this test match.

Jadeja could potentially be the fourth Indian player that was injured in the ongoing test series. Earlier Mohammad Shami and Umesh Yadav were injured in the first two tests and are ruled out for few weeks.

Pant and Jadeja are the latest victims in the ongoing test. Indian fans and team management will be hoping to see both players play in the reminder of the series. Both have vital roles to play for India and the visitors cannot afford more injuries.