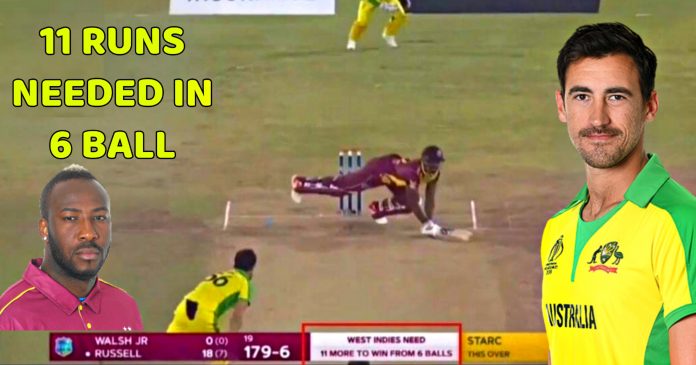 Australia grabbed victory from the jaws of defeat in a thrilling encounter vs West Indies in the 4th T20. The heroes of the victory were two Mitchells. They were Mitchell Marsh with the bat and Mitchell Starc with the ball. First it was Marsh who scored an amazing 75 with the bat in just 44 balls. Then it was Mitchell Starc who bowled a sensational last over to deny West Indies a victory. The left armer gave just 6 runs in the final over. Consequently he successfully defended 11 runs to win the game for Australia.

The fourth T20 between the two teams was played at Gros Islet. It was the tourists who won the toss and elected to bat first. The opener Mathew Wade was dismissed for a single digit score in the second over itself and Australia had lost an early wicket.

After the first wicket, captain Aaron Finch and Mitchell Marsh added 114 runs for the second wicket. Both made their respective half centuries and flogged the hosts to all corners of the park. Finch made 53 runs in 37 deliveries while Marsh top scored with 75 which included 6 sixes. In the end Dan Christian played a little cameo of 22 runs in 14 balls. Hence Australia finished with an imposing total of 189-6 in 20 overs.

In reply West Indies got off to a flyer. The opening duo of Lendl Simmons and Ewin Lewis put the Aussies bowlers to the sword and formed a partnership of 62 in just 4.5 overs. It was Adam Zampa who got the much needed breakthrough for his team. He dismissed Ewin Lewis for an individual score of 31 in 14 balls.

The home team lost a few quick wickets thereafter. Hence when Lendl Simmons was gone for a score of 72, West Indies were left in trouble at 132-5 in 15.3 overs. After that Andre Russel and Fabian Allen counter attacked the Aussies and added 47 runs in just 22 balls for the 6th wicket.

Starc does it for Australia!

Just when it appeared that they would take West Indies to victory, Allen was gone on last ball of the 19th over. Still the hosts were favorites to win the match when just 11 runs were needed to win off the final over. Moreover Andre Russel was on strike of the last over and was in terrific form.

However all that changed when Mitch Starc took the ball in the last over. He bowled searing Yorkers to Russel one after another as the explosive batsman kept missing his hits. The bury allrounder managed to get one off his bat on the last ball for a six, but by then it was too late.

Australia sneaked to victory by 4 runs and Mitchell marsh was adjudged the man of he match.

Watch the full highlights of the match here:

Watch : Sri Lanka declares team for India series. A shock replacement as a...