India and Sri Lanka are involved in the 3rd T20 game of the series. This is the final match of the series. Both teams are tied at 1-1 and the team which wins the match will seal the series. Hence this is a must win game for both the teams. Moreover Indian team has remained unbeaten in past 9 T20 series. They will look to continue the unbeaten run.

Since 9 players of the Indian team are out of series due to COVID, they have no choice but to play with a seriously depleted team. Consequently there are just 5 batsmen available for the Indian team. Just like in the previous game yesterday, India starts with a disbalanced team. This hampers their chances of winning the match and the series.

At the toss, India won and decided to bat first.  He said – “We are gonna bat first. We’ll look to post a good score. Our bowling is quite strong, so we are going to defend. We are just focusing on today’s game, we are not going to take any pressure from the past.”

Also he said that since Navdeep Saini is injured, Sandeep Warrier will take his place and mark his debut.

However his decision to bat first back fired spectacularly. On the fourth ball of the over, Dushmantha Chameera struck. He sent the Indian captain back when the southpaw edged to slips. Dhawan was out for a golden duck and all hopes of him playing a captain’s knock went up in smoke.

Earlier on the second ball of the over, there was a funny moment. Chameera bowled a half volley which was driven nicely by Gaikwad thorough off side. Consequently to chase the ball, all the four fielders on the off side started running after the ball in a hilarious way. It was as if they were running in a marathon.

Off the mark with a boundary 💫

Gaikwad pushes the ball through extra cover via a misfield 👏 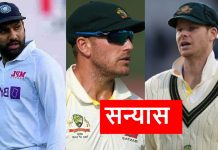 Sachin – Sehwag will open the batting for India, Again!!! Read how!