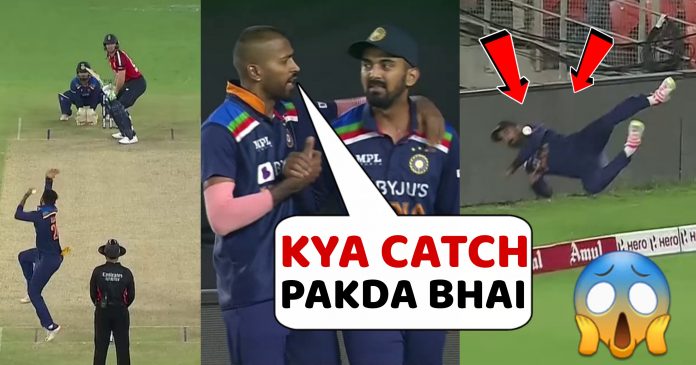 KL Rahul is one of the most important part of India’s limited overs team. He can bat wherever the team needs him to. Rahul can open, bat in middle order or even lower order. He can both bash and block the ball whenever required.

Also, he can keep the wickets if the team management wants it. All in all, he is a complete team man.

One more aspect of his cricketing skills was visible during the first T20 between India and England. A sensational fielding effort which made everyone in the ground stand up and applaud.

The moment arrived when English openers Jos Buttler and Jason Roy were batting. The star of the test series Axar Patel was bowling. Buttler came down the track to launch him over for a six.

The ball was hit by full flow of Buttler’s bat and was travelling thick and fast above the fielder at long off. That is when KL Rahul standing at long off decided to intervene. He flung himself back to catch the ball and got hold of the ball and it appeared he had taken the catch. However, he realised that the momentum of catching the ball will make him go beyond the boundary.

Then, in a moment of quick thinking and action, the fielder threw the ball back into play while he was still in the air. After doing that, he fell into the boundary but by then had saved 4 vital runs for his team. Efforts like these are a testament to the skills and fitness which the Indian players are having in modern day cricket.

This was a pretty much superhuman effort where KL Rahul just flew like a bird. He could not catch the ball but his effort still made sure that a six was saved and the batsman could take only a double.

Earlier, India got off to disastrous start after losing the toss. Except Shreyas Iyer none of the player could score freely. Skipper Virat Kohli’ poor form continued as he was dismissed for a duck again. It was his second consecutive zero in international cricket.

For India, Shreyas Iyer scored a valiant 50. He was out in the last over after scoring 67 runs off 48 balls. His innings made sure India crossed 120 runs.

Jofra Archer was the most successful bowler as he picked up 3 wickets for 23 runs.

Watch the video of this save, here:

What an Effort from KL Rahul to save a 6 😳🔥 pic.twitter.com/k7hKiVGXNm