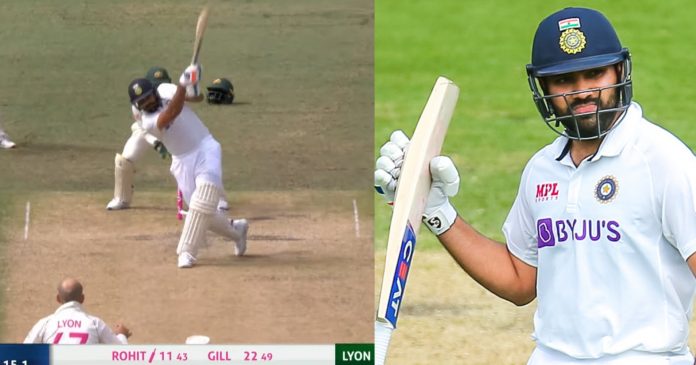 Rohit Sharma has looked in fine touch against Australia until he got dismissed. Both Rohit Sharma and Shubman Gill were solid in the initial overs as they stitched a 50 run partnership.

Sharma was drafted into the team in place of Mayank Agarwal. He looked very good in his 26 before he was dismissed by Hazlewood. During the initial overs, both the openers have ensured that India did not lose early wickets like previous two tests.

Both looked solid in defense and rarely looked uncomfortable. Rohit Sharma hit 2 sixes in his innings. But his most authoritative shot came against Nathan Lyon. After playing a maiden over against Lyon, Rohit charged down the track and cleared the rope with ease.

This was arguably the best shot in India’s innings. With that six, Rohit Sharma became the first cricketer ever to hit 100 sixes against Australia across all formats.

On the other hand, it was also his 424th international six. Rohit Sharma is always known for his six hitting ability and he has once again proved his credentials at Sydney today. Shubman Gill has also made a name for himself by scoring his first Test fifty.

International six No.424 for Rohit Sharma!

Both the openers were dismissed quickly and Australia have found a way back into the test match. Earlier in the day, Indian bowlers made a terrific comeback after being outplayed by Marnus Labuschagne and Steve Smith yesterday.

Ravindra Jadeja was the pick of the bowlers as he took four wickets. After breaking the partnership between Marnus Labuschagne and Steve Smith, Indian bowlers took wickets quickly.

The pitch is batsman friendly when you compare it with the pitches at Adelaide or Melbourne. It is offering more to the spinners as the match is progressing. Nathan Lyon will be a vital cog for Australia from here on. Indian batsmen need to play more pragmatically if they want to have a first innings advantage.

Both Rohit Sharma and Shubman Gill were good at the top. They became the first pair to put up 50 run partnership for India in 14 innings. But the onus is now on Indian middle order to bat Australia out of this match.