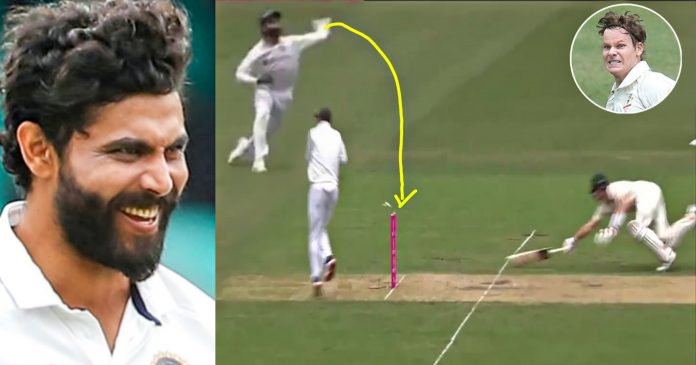 Ravindra Jadeja is arguably the best fielder in world cricket going around. He is sensational on the field and only one of very few who can make a difference with his fielding alone.

Today he once again proved his supreme fielding skills. He effected the dismissal of Steve Smith who looked brilliant with the bat in Sydney. After poor outings in Adelaide and Melbourne, Smith came out of his shell.

He counter attacked Indian bowlers and got the better of them throughout his innings. Smith looked at his best and Indian team could not do much to stop him as the wicket was plain flat.

Despite losing wickets at the other end on Day 2, Smith went on his business. He reached yet another test century in his illustrious career. After losing all the notable batsmen, Smith started to carry Australian innings on his own.

He scored some quick runs and was threatening to increase Australia score. But Ravindra Jadeja had other ideas. Smith pushed the ball to backward square leg and started running to get back onto strike.

Jadeja who was fielding at the position was quick to latch onto the ball and release a bullet throw. His throw hit the bottom of the stumps directly and Smith was found short of the crease.

Indian bowlers came back strongly on day 2 after a disappointing first day. Jadeja was on top of his game and his knack of picking wickets against the run of play helped India brilliantly.

He dismissed Labuschagne at 91 to give a crucial breakthrough for India. Wade was the next victim as he threatened to attack Indian bowling. Although he leaked runs Jadeja got important wickets for India.
Watch Here:

He was directly involved in 5 of the 8 wickets that fell today. Jadeja along with other Indian bowlers simply turned the match in India’s favor as Australia managed only 338 after a solid first day.

Smith was the pick of the batsmen as he scored an impressive hundred and carried Aussie innings for majority of second day. India will now have to bat sensibly as the wicket is batsman friendly. The team needs to have a considerable first innings lead as SCG tend to help spinners better on final two days.

Watch : Rishabh Pant found COVID positive in England. Could be out of the...