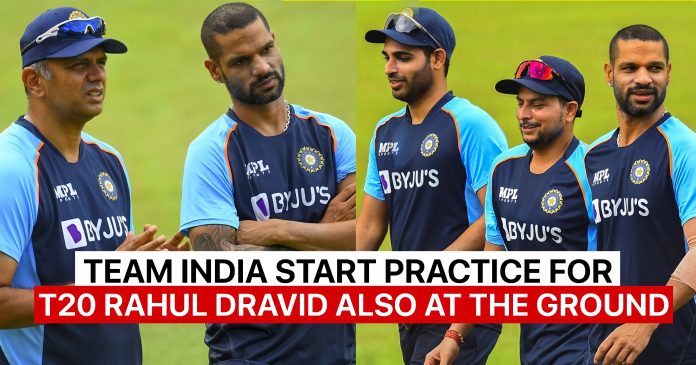 The Indian team has begun their training for the upcoming limited overs series vs Sri Lanka. After spending 3 days in hard Quarantine, the Indian team is now eligible to spend time on the ground. The first ODI is scheduled to start from 13th July in what will be a 3 match series. Post that the two teams will clash for a T20 series of 3 games from 21 July.

Shikhar Dhawan is the captain for the Indian team on this tour. The right hand seamer Bhuvaneshwar Kumar is his deputy. Former great Rahul Dravid is the coach for India on this short tour of Sri Lanka.

In a post shared by BCCI on social media, players can be seen doing the training stuff as they run and stretch. In one picture seven of the team members are running. That includes Hardik Pandya and Yuzi Chahal as well as Nitish Rana and K Gowtham. Another picture of the training includes Krunal Pandya jogging on the ground.

Shikhar Dhawan and Rahul Dravid are involved in a discussion in one of the image. The two are taking a look at the players. Additionally with just around 10 days to begin for the series, Team India will be looking to iron out their flaws.

Too many spots up for grab!

A lot of scrutiny is also on the players as only 3 players are guaranteed starters in the team for the first ODI. Accordingly they are the captain Shikhar Dhawan, vice captain Bhuvaneshwar Kumar and all rounder Hardik Pandya. Other than these three, none of the 8 spots of the team is fixed.

Prithvi Shaw seems to be the most favored batsman to partner Dhawan in opening as the two have did it successfully in IPL. Moreover they play for the Delhi Capitals and have a good record as openers. Also there are a lot of batsmen eyeing for the spots of middle order.  Those are Surya Kumar Yadav, Manish Pandey, Nitish Rana, Sanju Samson and Ishan Kishan to name a few.

Krunal Pandya, Varun Chakrvarthy, Yuzi Chahal, Kuldeep Yadav and Rahul Chahar are the spin choices for India. In all likelihood only two spinners would play the match. Hence it will be interesting to see just which of the following 2 spinners out of the 5 could play.

Watch Nail biting Last Over between MI and SRH 16 Runs Needed in 6...

IPL 2020: Suresh Raina Backs MS Dhoni To Bat At Vacant No.3 for CSK

Watch Ashwin’s magical balls as he looks all set for 400 test wickets.