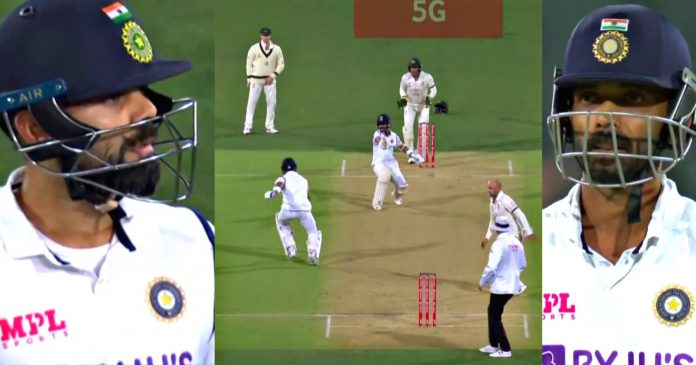 Indian captain Virat Kohli looked in impressive touch in the first test match against Australia. Kohli looked extremely cool and confident as Australian bowlers were clueless for most part of his innings.

During the process, Kohli scored his 22nd fifty. But luck struck Australia big time as Indian batters Rahane and Kohli had a terrible mix up while running between the wickets. Kohli was going at good pace and kept the scoreboard ticking as the ball became old.

But the skipper was dismissed courtesy of a run out. In the 77th over, Ajinkya Rahane nudged the ball to short mid off and tried to take off for a single. He called for the run and Virat Kohli, although not convinced, responded.

Halfway through the pitch, Rahane backed away from the run and Virat was dismissed in a bizzare fashion. The 32-year old was furious in the fashion in which he was dismissed. But he left to the pavilion without showing much anger but looked dejected in his walk back.

Here is the incident

The runout was primarily due to error of judgement from Rahane and fans were furious over the dismissal on social media. India were in really strong position prior to this runout incident. Kohli was dismissed after a well made 85.

India won the toss and chose to bat first. But the hosts struck in the very first over after dismissing young Prithvi Shaw for 0. Mayank Agarwal also fell despite showing resistance and tried to see out the new ball.

Experienced Cheteshwar Pujara and Virat Kohli ensured that there is no further damage. The pair made sure that the ball became old and scored at a slow pace. However, Pujara fell to Lyon’s magic.

Vice captain Ajinkya Rahane looked in great touch and managed to forge a good partnership with Kohli. But once Kohli departed, Australia made in roads with second new ball. The Aussies were able to dismiss Rahane and Hanuma Vihari in the closing stages of Day 1.