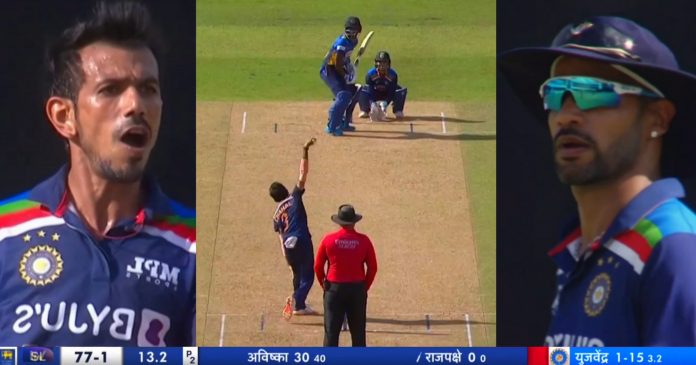 Second ODI between India and Sri Lanka has begun in Colombo. Shikhar Dhawan is the captain of Indian team while Dasun Shanaka is Sri Lankan captain. It was the Islanders yet again who won the toss and elected to bat first. The openers Avishka Fernando and Minod Bhanuka gave a strong start to their team.

The duo added 77 runs for the first wicket. It was then Yuzvendra Chahal who took two wickets in 2 balls. The first wicket was left handed Minod Bhanuka who made 36 runs in 42 balls. He was gone when he tried to smash it over mid wicket. However the batsman mistimed his shot and could only inside edge to short mid wicket where Manish Pandey made no mistake.

Two in two for Chahal!

On the very next ball Bhanuka Rajapaksha tried to defend it with a straight bat. But it was a brilliant delivery by the leggie as it dipped at the last moment and turned away. Hence the batsman could only edge it to the keeper Ishan Kishan and was gone for a golden duck.

Earlier Sanju Samson recovered from his knee injury and the BCCI medical team had declared him fit and available for selection. However he was not picked ahead of Ishan Kishan who got a sparkling 50 in the first game.

The teams for today is :

In the first match India won by 7 wickets as they chased down the target in 36.4 overs. A chase of 263 runs were over hauled without any fuss. Prithvi Shaw was declared the man of the match.

Yuzi Chahal spun a web around the Lankans, claims 2 wickets in 2 consecutive balls! 🔥