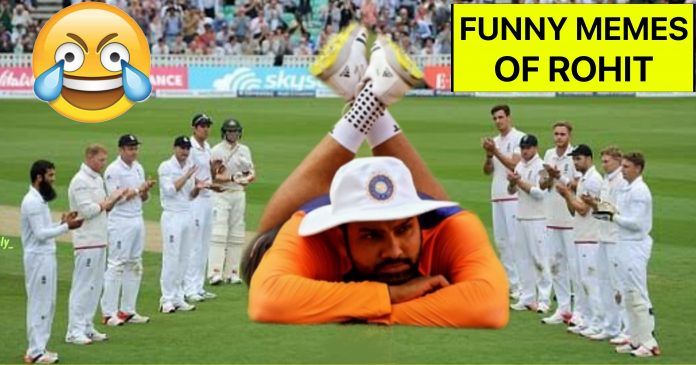 Star Indian opener Rohit Sharma has been going great guns in the ongoing test series vs England. He is the only batsman from India to hit a century in this series. Also, he has been the highest scorer for India in two straight tests in second and third.

Even when the ball was taking turn and the pitch was dry in the tests and everyone found it hard to score, Rohit continued to make runs easily.

While his century made set up the base for a good score by India in the second test, his quick 25* made sure India chase the target in the fourth innings without any hiccups.

Now, when the fourth test is about to begin from 4th of March, Rohit or the ‘Hitman’ is again in news. This time however, Rohit is in news for reasons outside of cricket.

Recently, Rohit had shared a picture of him on Instagram where he is lying on the ground in a prone position, thinking about something and his legs are in air inter linked with each other. He shared it with the following caption ” Wondering what the pitch would be like for the fourth test”

This caption actually has a hidden taunt in it. Here, Rohit is taking an aim at the critics of the pitches rolled out in the second and third tests. The pitches which were turning from the start came in under fire from a lot of cricket experts. They said that India had gained an unfair advantage by giving a wicket that is turning and bouncing from day 1 that makes run scoring difficult and a bit of lottery.

While numbers of former players have criticized the pitch, many other ex players have supported the pitches saying that not the wickets but it is poor technique of the batsmen from both sides.

Coming into the fourth test also, the chatter around the wicket refused to die down. People are thinking and assuming just how would the pitch would play in the deciding test of the series.

This picture posted by Rohit has sparked a meme fest on the social media. Fans of Rohit and Indian team have jumped into the bandwagon of the meme making and coming up with hilarious and comical memes of their own.

Watch some of the funniest memes related to that picture -:

outside a stall, rohit spotted eagerly waiting for his vadapav pic.twitter.com/thxJkn9vsV