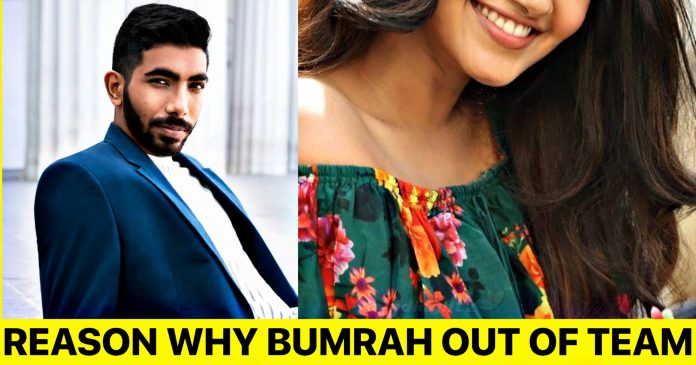 Jasprit Bumrah, the pace spearhead of India bowling line up had been ruled out of the final test. Bumrah had asked the Indian team management to release him form the team due to personal reasons. The management complied with the request of ace pacer and granted him the leave.

People were wondering what made Bumrah opt out of the deciding test of the series. Now, it is clear that why Jasprit Bumrah, didn’t want to play the final test. Its a known fact, that Bumrah is the pace spearhead, of not only the Indian team but whoever teams, he plays for.

Marriage of Bumrah on the Cards!

The news is that, he has taken a break from cricket at international level, because he wants to get married!. Since, Bumrah will be a part of IPL for two months, where he won’t have the time to get married. Also, he will have to live in a bio bubble enviroment and stay away from his family and friends. So, he has chosen to get married and stay at home. Also, India are likely to play, non stop cricket for the next 12 months.

Even after IPL, India are scheduled to play a five test series in England, where Bumrah is expected to play a crucial role with the ball. Additionally, if India qualifies for the final of World Test Championship, then India will play New Zealand, in the Finals which will be held at Lords in England. This will make 6 tests within a span of 2 months for the Indian team.

After this also, there is World T20 approaching and it will be held, in India. Bumrah, like always be expected to lead India in this tournament, as well.

To counter a busy schedule and future tour programme, where Bumrah will play all three formats, at the highest level, he has taken a break to marry and also stay afresh for the gruelling set of matches.

Who, Bumrah is going to marry, is still a question as the person who will become his wife is mysterious.

Also, its highly unlikely Bumrah, would have bowled too much in the final game. In the third game, he bowled just 6 overs for no wickets as the spinners ran amok. The fast bowlers on either side, remained spectators.

In the fourth game as well, the pitch is likely to remain conducive for spin, and in all likelihood will spin and turn, from the word go. In this situation, Bumrah would not have had an impact on the game as the spotlight will once again on be the spin duo of, Ashwin and Axar Patel.

Currently, India is leading 2-1 and are firm favorites to seal the series and a place in the World Test Championship Finals by winning the series 3-1.