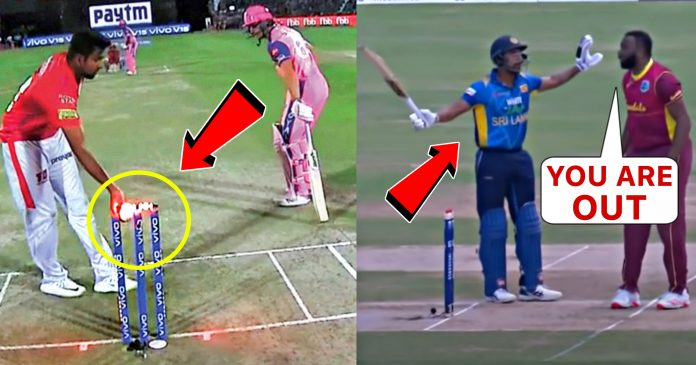 The first game between West Indies and Sri Lanka saw an old controversial rule sprung up. Sri Lankan batsman Dasun Gunathilaka was adjudged OUT via ” obstructing the field” mode of dismissal. It again opened the pandora box involving cricket where batsmen have been out in unusual ways.

The incident happened during 22nd over of Sri Lanka’s innings. West Indies skipper Kieron Pollard was bowling to Gunathilaka. The batsman defended one close to his feet. Seeing this, the non strikers end batsman started to run so that he could pinch a single. However, Gunathilaka wasn’t keen to take the single as he sent him back. By that time, Pollard had reached close to the ball and was about to pick the ball. But then, to avoid a collision with the bowler, Gunathilaka back pedaled. While doing that, he stepped on to the ball as Pollard failed to pick it.

At this, he appealed for Out and the umpire in accordance with the rules of the game, adjudged him OUT. Whether that was done deliberately or not, is a topic of discussion for another day. But, obstructing the field is just another mode of weird kind of dismissals in cricket.

Doesn’t look deliberate to me. This is clearly not out.

In this post, we take a look at 5 other modes of dismissal that is different and unnatural. The first one amongst these is “handling the ball“.

Watch this mode of dismissal here:

3) Mankading – It occurs when a non strikers end batsman leaves the crease before a bowler has delivered the ball in order to take quick run. The prerogative lies on the bowler if he takes the bails off with the ball in his hand and can appeal to the umpire for dismissal. This is considered lawful but against the spirits of the game.

Watch the video of this kind here:

4) Retired Out – Here, a batsman may be adjudged out if he has retired from the field while batting, without the permission of umpire. This mode of dismissal is so rare that only two batsman have been considered out via this. Both instances occurred in the same innings.

5) Timed out – Timed out is one such form of dismissal that is based upon time limit as the name suggests. Here, if a batsman is out and the next scheduled batsman does not takes the field in following 3 minutes, then, he will be considered Timed out for delaying the game.