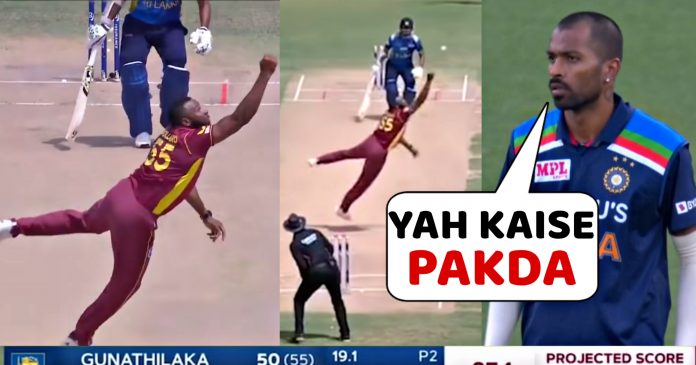 Hardik Pandya and Kieron Pollard are two of the deadliest and explosive all rounders in the game of cricket. Both of them can hit sixes for fun when time requires. Besides, both can bowl a few overs of solid seam bowling and are absolutely gun fielders.

Its a no secret that both of them are the best of friends. The friendship between them developed while playing in the IPL. Pandya started to play in IPL from 2015 while Pollard has been a part of the IPL since 2010. Both of them get along nicely with each other and can often be seen complimenting each other on social media.

In his latest Instagram video, Pandya is again seen appreciating Pollard’s stupendous effort in the ODI game vs Sri Lanka.

The first game between Sri Lanka and West Indies involved an acrobatic set of fielding effort by Pollard. The openers of Sri Lanka were batting nicely and had hit a century stand. Dimuth Karunaratne and Gunathilaka had both hit their respective half centuries and were looking good for more.

In the 20th over, Pollard was bowling to Karunaratne. The bowler bowled a length ball as the batsman casually tried to hit a straight drive which went up flat in the air. The ball was travelling flat and seemed to be out of reach of Pollard.

However, Pollard being Pollard, he dived full length and intervened the direction of the ball. Consequently, the ball stuck into his hands but still popped out and was about to fall as Pollard once again dived full length to take an screamer of a catch!

The sight of Pollard throwing himself on to the field at 34 years of age was a testimony of his fitness and commitment to the game.

That dismissal of the batsman through an inspiring catch by the skipper started a collapse of Sri Lanka. Hence, from 105-0, they were dismissed for 232, a modest score by any standard.

Hardik Pandya in his Instagram story has shared a video of this catch calling it as ‘legendary’.

The way Pollard has caught the ball, Pandya’s statement about it does justice to it.

Watch the video of that sensational catch here:

How's this for a return catch from Kieron Pollard?!

He ends up taking it two strips away from the pitch 😲#WIvSLpic.twitter.com/yqqW9PMyhz

In the first ODI, West Indies won by 8 wickets. Shai Hope was adjudged the man of the match for his 10th century which led West Indies to victory by 8 wickets. After this, there are two more game to be played in the ODI series.