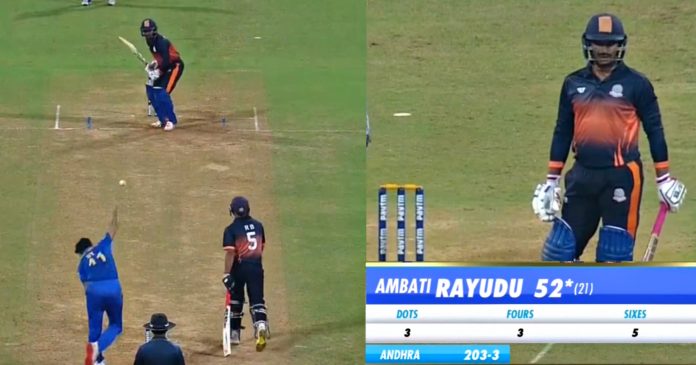 Former Indian cricketer Ambati Rayudu was at his best against Puducherry in the ongoing Syed Musthaq Ali Trophy. The 35-year old is keen to prove his credentials as his IPL future could be up in the air.

After having a mediocre IPL by his lofty standards, Rayudu is looking to get back into fine form. There has been speculation on his future at Chennai Super Kings as the franchise is looking to fill in young blood.

Ambati Rayudu scored 358 runs in IPL 2020 which is a good campaign but not great for his standards. However, he is using the ongoing Syed Musthaq Ali Trophy to regain match experience.

The talented cricketer failed in the first two matches in SMAT but came to life in the third match against Puducherry. Playing for Andhra team, Rayudu rallied the team after coming on to bat in 12th over.

Rayudu scored 62 runs from just 26 balls in an innings which featured 5 fours and 5 sixes. Meanwhile, his brilliant innings propelled Andhra to a commendable 226/4 on a batting paradise.

But Puducherry had other ideas as they came out to bat in aggressive fashion. They managed to stay within the required run rate margin and chased the massive total. Sheldon Jackson impressed with an unbeaten century.

Meanwhile, Paras Dogra also scored a half century in 18 balls to coast Puducherry to an impressive win. This knock will give him loads of confidence and definitely tilt some heads in CSK management.

Although it is still unsure where Ambati Rayudu plays next season, he will be an asset in IPL. On the other hand, all teams are asked to send the retained squads by January 21 deadline.

So players who are going into the auction pool will be made public soon. Meanwhile, there is a trade window that is open right now where franchises can transfer players between them rather than releasing them into auction pool.

Chennai Super Kings are looking at a major rebuild after missing out on play offs for the first time in their history. Players like Kedar Jadhav is already expected to be released, while the team management are planning to release some big names to make room for youngsters in IPL 2021.