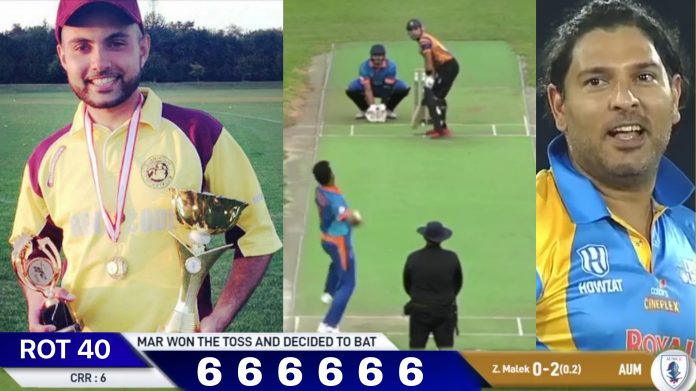 In a local T10 cricket tournament of Europe, a player called Zeeshan Khan smashed 9 sixes in just 35 balls. This competition called as European cricket series is being played in Hungary. Moreover, as many as 16 teams participate in the tournament. It is being done to popularize the game of cricket in Europe.

This match was played between Royal Tigers Cricket Club and United Csalad. Batting first, the former hammered 123 runs in 10 overs for the loss of 2 wickets. Opener Zeeshan Khan thrashed 81 runs in just 35 balls with 9 sixes to his name. He started with a six on the fifth ball of the first over.

His second six came in the sixth over. Post that, he didn’t look back and hammered whatever came in his range. Hence, in the next 4 overs, seven sixes came from his bat alone. Consequently, Royal Tigers Club ended up making 123 runs in their allotted 10 overs.

It was Hassan Ashfaq who bore the brunt of Zeeshan Khan as he was belted for 38 runs in 2 overs. The wicket takers were Dheeraj Gaikwad and Francis Farell with a wicket each.

A one sided match

In reply to a huge target of 124, the chasing team were never really in the hunt. Accordingly, they kept losing wickets regularly and could never recover. Hence, at the end United Csalad only made 79 runs in 10 overs for the loss of 8 wickets.

The opener Bobby Patel was the highest scorer for his side. He made 20 runs in 19 balls with a four and a six. Even while bowling, Zeeshan Kham managed to trouble the opposition. Consequently, he took 1 wicket in the solitary over he bowled and gave 9 runs.

Ruturaj Sawant was the most successful bowler for his team. He had 2 scalps in a single over. Moreover, he gave just 2 runs in that over.

For his all round performance with both bat and ball, Zeeshan Khan was adjudged the man of the match.