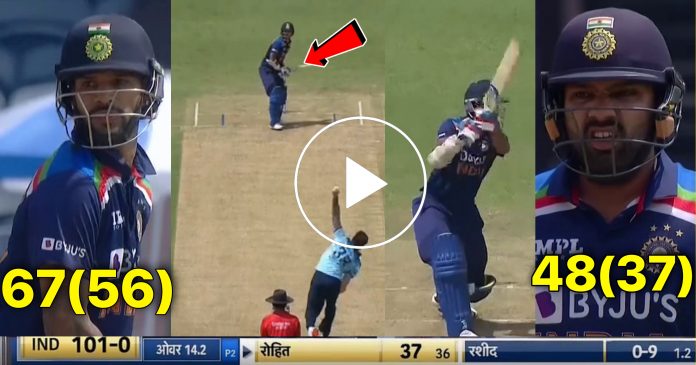 India and England are playing the last match of the tour. The third game of the three match ODI series is underway. Both teams have won 1 match each and the series is tied at 1-1. Whichever team wins the match, will win the series. After a poor show in the test and T20 where England lost 1-3 and 2-3, they will certainly look to win the series at least.

England captain Jos Buttler won the toss for the second match in a row. This also means that Virat has lost last six tosses in a row. As expected, Buttler elected to field first. Both the teams have gone with one change each. India have played seam bowler and Yorker specialist T Natarajan while England have included pacer Mark Wood instead of Tom Curran.

Kuldeep Yadav who had a horrible time in the first two games has been dropped. The Indian openers were under a bit of pressure to give a solid and quick start to India. In the last match, the score of 336 proved to be too less against a powerful English batting line up aided by a flat pitch and dew.

Shikhar Dhawan and Rohit Sharma started again on a cautious note but unlike in the previous match, they did pick up the pace. The first 50 runs of India came in 8 overs. This was the over when both the openers switched gears. Left arm seamer Reece Topley was hit for four fours in an over that included 17 runs.

While Shikhar Dhawan hit three boundaries in it, Rohit Sharma contributed by hitting fourth four. Dhawan specially was severe on anything loose and took full toll of it. He completed his 50 in 44 balls and had 9 fours. Rohit was comparatively more sedate to Dhawan. Soon both these openers completed their second century partnership in three games.

The Indians took 14 overs to reach 100 runs. While doing this, the duo of Dhawan and Rohit set two records. They became just the seventh pair in ODI cricket to register 5000 runs in partnership and only the second opening pair to have 17 hundred partnerships. Now only the legendary opening duo of Ganguly-Tendulkar have more 100+ partnership than these two with 26 such partnerships.

Also, they are just the second pair for India to have more than 5000 or more runs in partnerships.