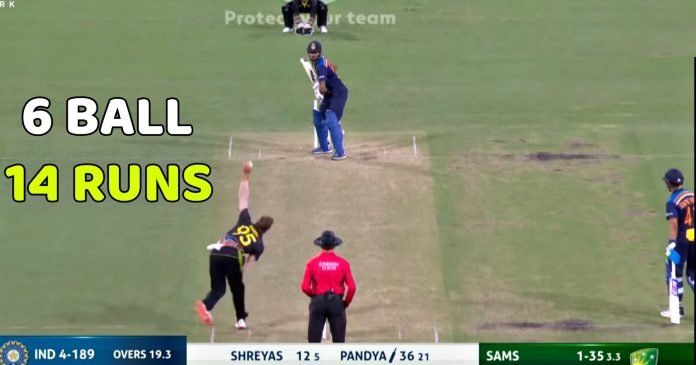 Hardik Pandya has been one of the best hard hitters in world cricket for few years now. The talented all rounder always had the knack to win the matches from difficult situations.

He is at his dangerous best in T20 format as he can swing the match in just a span of few balls. Pandya has won India many matches with his powerplay hitting in the slog overs.

The same was the case in the recently concluded T20I series against Australia. He came onto bat towards the fag end of the innings but made his mark by chasing down 14 runs in the last over with ease.

Pandya did not look in good touch, particularly at the start of his innings. But as he faced more deliveries, he started looking dangerous which was warning signs for Australia. He scored 2 runs in the first ball after slogging the behind the deep square leg.

The equation was down to 12 runs in just 5 balls. He then heaved a massive six over wide long on. But Daniel Sams came back strong with a dot ball. India needed 6 runs from 3 balls. While many thought the match was going to be a last ball thriller, Pandya simply dismissed the ball over deep mid wicket boundary with ease.

Here is Pandya’s brilliant hitting in final over

India were able to win the match easily at the end. Pandya was once again the unsung hero. The 27-year old was able to win yet another match in the final T20I. He ensured India were the champions in T20Is.

His batting has helped him win the Man of the series award. Pandya was able to stage a brilliant comeback into competitive cricket after undergoing back surgery last year. He was impressive in IPL 2020 as he played good knocks to help Mumbai Indians win 5th title.

On the other hand, Hardik Pandya was recalled into the test squad for the upcoming series against England. The selection committee has put their trust in Pandya to make a comeback in the longest format.

It will be interesting to see how Pandya will play in the series. But he will remain India’s biggest trump card and match winner in limited overs’ formats.