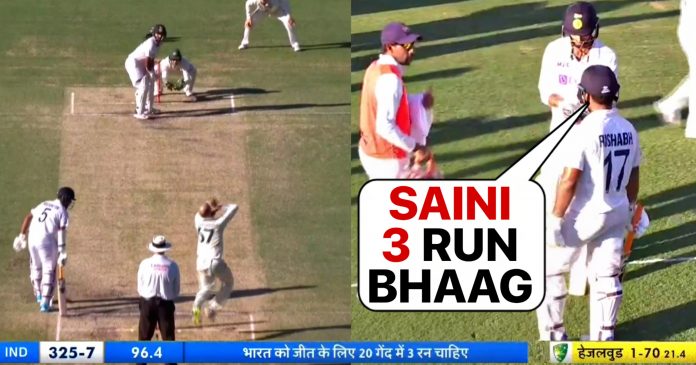 Indian cricketer Rishabh Pant has etched his name in history with his heroics in Brisbane test. The young wicket keeper batsman has kept his cool and guided India to perhaps to their biggest win in test cricket till date.

After losing his wicket for 97 in Sydney, Pant learnt from his mistakes and did not take unnecessary risks in Brisbane. In fact, he resisted playing big shots against Lyon when the ball was floated outside off stump on the final day.

Despite losing strong Pujara and other batsmen at the other end, Pant kept going for the win. He took excellent calculative risks as Australian bowlers had no clue on how to get him out. Pant got good partner in Sundar who took massive burden off Pant’s shoulders when the required run rate punched above 6.

Ultimately, once Sundar was dismissed, Pant took the charge to the bowlers and stayed till the end. Speaking on Sports Today, Pant has revealed that he asked Saini to run 3 but not 2 after hitting the last shot.

The southpaw has also laughed about forgetting that Saini had a groin injury at the time. Pant has played the shot straight down the ground but he did not play the shot from the middle of the shot.

“When I played the lost shot, I felt the ball hit the bottom of the bat. The outfield was also slow. So when the ball was travelling, I told Saini (non-striker). I told him Saini ‘3, not 2 but 3’. His groin injury slipped my mind and I was running fast,” Pant said.

“First run, I closed my eyes and ran. While running the second run, I noticed that the mid-off fielder didn’t even chase the ball. I was wondering ‘why is this fielder not running?’. Then I noticed, the ball was going towards the boundary, then I was filled with joy. I was shouting ‘Saini 3, we have to run 3’. Saini was running on one leg. It was fun,” he added.

India created history by winning the Brisbane test in a nerve wracking test series. The excitement around the series was high but once India were dismissed for just 36 in Adelaide, many considered the series will be a clean sweep for the hosts.

But the visitors fought ferociously despite losing almost the entire main team due to injuries over the course of the series. Pant has played a massive role in India’s win in this series as he finished as the team’s highest run getter despite not playing the first test.

India are now gearing up for the test series against England. The players who returned from Australia are mostly in home quarantine but will join the base camp in Chennai soon. England will play India from February 5 and have just won 2-0 against Sri Lanka while resting some key players.