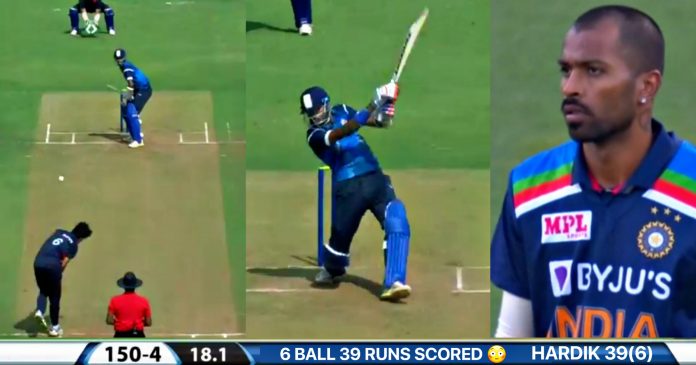 Hardik Pandya is one of the stars of Indian cricket in limited overs. His insane hitting abilities is for all to see. Be it the IPL or international cricket, Pandya is known for his destructive ability with the bat. When he initially came into international cricket, Pandya was a genuine all rounder. He could bowl with nippy pace as well and was instrumental in the middle overs.

However, an injury couple of years ago had an adverse impact on his bowling. He no longer bowls regularly to save his dodgy back. Since that injury, Pandya has not bowled for his IPL team at all. In International cricket, he bowls only when the team is running out of options. Thus, as of now, Pandya is more or less an specialist batsman. This is exactly the reason he has not been named in the Indian test team for England.

In this post, we will take a look at an old moment involving Pandya. In this match, the right handed big hitter smashed 39 runs in an over and bullied the bowler like no other would do. It was a group match between Baroda and Delhi in Syed Mushtaq Ali trophy. The season was 2016 and Pandya had yet to make a debut in international cricket, though he had impressed everyone in IPL.

Winning the toss, Delhi elected to field first. The decision proved to be spot on as Baroda lost their 6 wickets for just 60 runs, and looked down and out. However, that is when Pandya made his presence felt. Together along with Swapnil Singh, he added 93 runs for the 7th wicket in just 8 overs.

Pandya finished with 81 runs in just 51 balls that included 5 fours and 6 sixes. It was due to his knock that Baroda managed a respectable 153 runs in 20 overs. During his stay at the wicket, there was this one over which made sure Pandya instantly came in the eyes of selectors of Indian team.

It was the 19th over of the innings and A Sudan was bowling the over. Pandya was looking to score maximum runs in last few deliveries and so began the carnage.

First ball of the over was punished over long on for a six followed by a four. Third ball was again pumped for a six and the 4th ball disappeared over fence for another 6. Moreover, it was a no ball due to height. The follow up delivery was crashed for a 4, before the last 2 balls were thumped for a couple of sixes. In all 39 runs came of the over. The over sequence read 6,4,6,6nb,4,6,6. Hardik Pandya had announced himself well and truly and displayed that he is all set to represent India at international stage.

Hardik pandya 39 runs in one over 😳😳 pic.twitter.com/D9UK2UOy1K