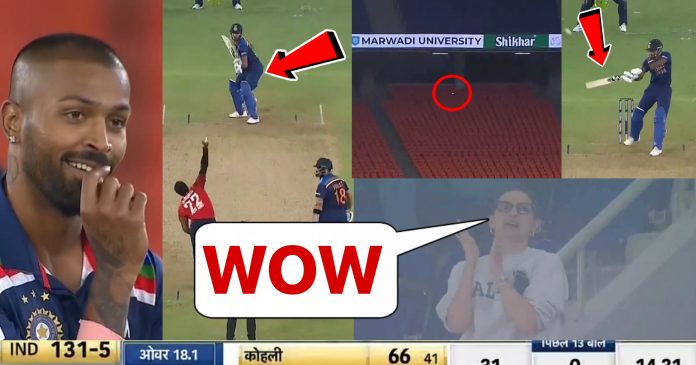 The first innings of the third match between India and England has ended. India batted first and made 156-6 at the end of 20 overs. The team managed to post a decent score on the back of captain Virat Kohli’s unbeaten 77 off just 46 balls as the rest of the batsmen struggled around him. Additionally, it included 8 fours and 4 sixes.

For England, Mark Wood was the most successful bowler taking 3 wickets for 31 runs. Moreover, most of the runs off his bowling came when he bowled his last over to a set Virat Kohli. Also, spinner Adil Rashid was the most economical as he conceded just 26 runs off his 4 overs.

None of the batters bar Kohli could make runs and score freely. After Kohli, the next best was of Pant as he made 25 runs in 20 before being cruelly run out. He was out when the score was at 64. Shreyas Iyer then couldn’t get going as he too was dismissed at the individual score of 9.

The new batsman Hardik Pandya then made his way out to the centre. Pandya had struggled to make runs in the first game. So, naturally all eyes were on him to score some quick runs.

However, Pandya like others just could not time the ball properly. For majority of his innings, he struggled to put bat on the ball. Most of his attempted swipes met with thin air. The impact which the team management wanted from him was missing.

Pandya repeatedly failed to hit the pacy and quick deliveries of Mark Wood and Jofra Archer. After trying many a times, Pandya got the ideal length to hit in the second last over of the Indian innings.

It was a short and wide delivery cranked up at 146ks. Pandya backed away outside leg and smashed it over third man for six. It was a welcome six for both Pandya and India. The six brought Pandya’s strike rate to above 100 for the first time in the innings. Also, Indian innings got some boost due to that six.

Even Virat Kohli appreciated that shot by giving a big thumbs up to Pandya. Moreover, Pandya’s wife Natasha too was present in the stands. Consequently, she clapped multiple times at the shot.

Pandya got out on the last ball of the innings when he tried to hit a six off the final ball. He was caught at deep extra cover on the bowling of Chris Jordan. Pandya finished with 17 off 15 balls including 2 sixes.

Watch the video of the six by Pandya, here:

Joe Root’s has something to say about Rishabh Pant. Watch out, Pant!