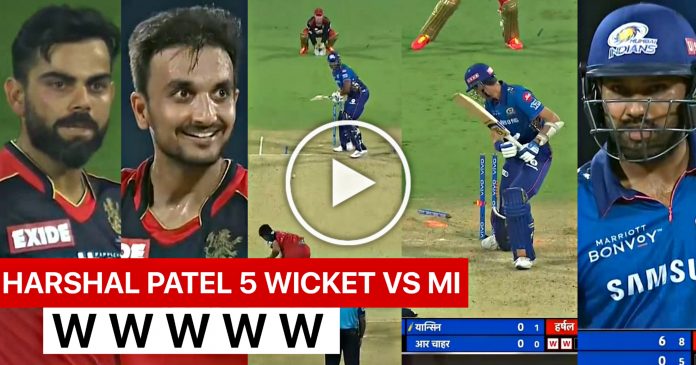 The uncapped medium pace bowler Harshal Patel created history in the inaugural game of the IPL 2021. He became the first bowler in the history of Indian Premier league to have taken a five for against Mumbai Indians. In the previous 13 seasons of IPL, no one had managed a five wicket haul against Mumbai. But, Patel shattered that record in the first match itself.

He finished with a remarkable figure of 4-0-27-5 and single handedly stopped Mumbai Indians from reaching a formidable score. Eventually, they could only make 159, where at one stage Mumbai looked all set to reach 180. With his brilliant bowling performances, he has made sure that RCB start as favorites in the second innings.

The first wicket of Harshal Patel was of Hardik Pandya. It was a full toss that got him the important and dangerous wicket of Pandya. The batter tried to swipe him off his pads but it missed the bat and struck Hardik on his back leg. The umpire immediately gave him out. But Pandya reviewed in hope. Third umpire still gave him out after looking at all camera angles.

Second wicket of Patel was Ishan Kishan. He tried to sweep him but missed the shot and was caught in front of the wicket. However, he was not given out by the umpire. Kohli took the DRS and proved correct. The third umpire gave his verdict as out.

But, the deadliest blows from Patel came in 20th over. On the first two balls, he dismissed Krunal Pandya and Kieron Pollard in identical fashion. Both were sent back to the pavilion on slower balls by hitting in to the leg side and giving the fielders a catching practice at mid wicket.

Patel was on hat trick after taking two in two. The new batsman and debutant Marco Jansen faced the hat trick ball. A slower Yorker somehow missed the stump as Jansen attempted to block but missed it. However, Patel made up for this on the next ball. Another fuller length delivery arrived and the batsman totally missed it.

The next sight was of shattered stumps as Harshal Patel celebrated his five wicket haul by throwing his arms in the air and letting out a scream.